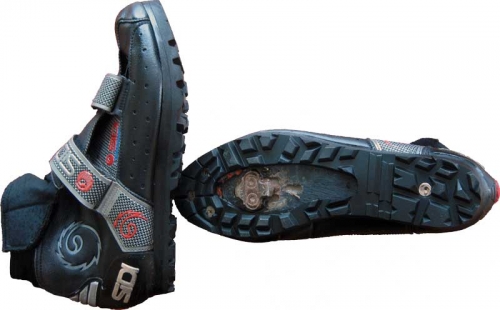 These Storm (I think that was their original name) boots had a bright red sole that was getting brittle and disintegrating but the upper part was still perfect so before going and spending $200+ on a new pair I took them to a cobbler near my work and explained what I wanted. He showed me a couple of Vibram soles and we agreed on a style and price, $40.

When I pick them up he had used a different sole but I was happy with the result. All I cared was that the cleat was a little receded and that I could walk a little on them, just like the original sole. That shiny thing on the heel is a rivet to help the sole glued to the shoe

We'll see how long the sole last or if it stays glued but for $40 I think I'll get at least another season out of these boots so I am happy.