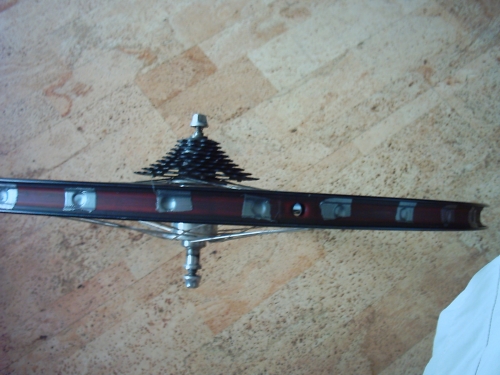 Day after photo: The crappy rim tape eventually caught up with me. The hi-tech rim strip you see there was about 10 yrs old. I had recently, temporarily replaced it while finding time to install real fabric rim tape.

The silver things are duct tape patches I had to add during the second flat to prevent another flat caused by the tube getting cut at the spoke holes. Bad luck had me fixing yet another flat a few minutes after the duct tape fix. That last flat was a cut on the the tire non related to this.

After that final flat the work lasted for the ~70 miles trip to the final control and then the short ride home.

BTW, the flat after I added the duct tape was caused by a tire cut not related to the rim tape failure, just plain bad luck. The cut on the tire was so small it took me a while, in daylight, in the comfort of my livingroom to find it and fix it. The tire got fixed from the inside (tire boot) and the outside (super glue to close the small cut on the tire thread)