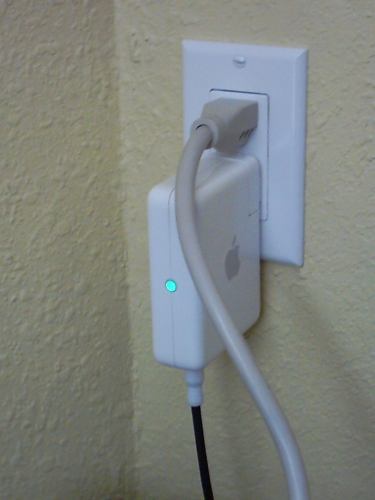 That's all there is to an Airport Express. The back cable goes to any stereo auxiliary/tape/etc input. (the other cable in the photo is just a power strip were other stuff is connected)

Green light=good, amber, not so good.

I asked JimG him if I could borrow his Airport Express (AE). I been thinking of buying one but wanted to test them before purchasing. This is an Apple gadget that can be used, among other things, to stream music from your computer to your home stereo or self powered speakers, Mac or PC it does not matter. I have a huge collection of music on MP3s that I've been wanting to put to better use. Picked up the AE and next day I spend a good 2 hours trying to make it work with no luck. I finally decided I would try to set it up connecting it directly to the router instead of trying to use the Powerbook's wireless connection. Once connected directly to my router, a non-Apple product by the way, via a regular cat5 (network) cable and added the AE MAC address to the router configuration it was a breeze to complete the process, 10 minutes and I was up and running.

Oh yes in order to work with wireless stations/routers that are not Apple branded you'll need to set the AE to "join an existing network" (client mode.) Tested the connection while I was still connected via cat5 cable to the router and then unpluged the whole thing, moved to the living room the final home ot the AE, connected the AE to the home stereo with a cable I got from Radio Shack ($13, Catalog #: 12-2057), waited for the green light to signal we were good to go, fired up iTunes on the computer, selected the speakers I wanted to used (Living Room) and songs came out through the stereo speakers, cool.

I listened to some music that day and by the evening I decided it was worth getting my own AE. Craigslist crawling, a couple of emails sent to unresponsive sellers and went to bed hopping I could find a used one next morning. Right before going for a ride I checked Craigslist again and there it was, a new listing for an AE, emailed and got a response within minutes. I picked up the AE on my way back from my ride, $50 in perfect condition with the original box, and all "materials" inside. I rode home happy. An easy setup followed using the saved configuration of the AE I had working, and again I was up and streaming music to the stereo in minutes. Cool toy and cheap too.