So I had decided to cancel the original July 3rd date for La Ruta Loca Randonnee 200k mixed terrain as most riders (including me) had expressed concern they where not ready for it. Yes this is a ride you need to be commited to in order to even start. 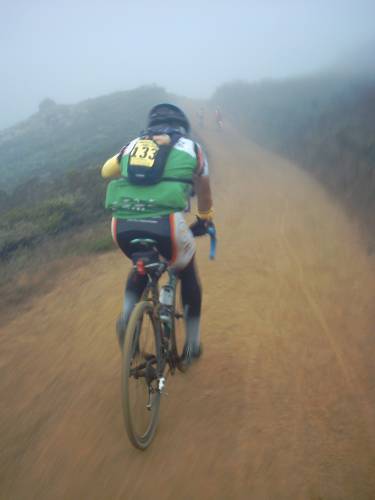 This year has been a hard one for me and deciding to embark on a big ride required a lot of determinacion, something I felt was lacking from most riders at the beginning of the summer. My goal with this ride has always been to provide a fun and challenging ride to all, one that most of us want to finish, not a ride that is a drag. La Ruta Local Randonnee must be fun to do.

After a hard summer that did not see much long or difficult rides, I started thinking it was time to get this thing going again. After a few emails sent to the San Francisco Randonneurs most riders agreed the first week of October was the best time to do it. Many loved the idea and were almost sure they were gonna do the ride, October 3rd was the final date.

At 6 am, as usual, we meet at the Marina Safeway in San Francisco, only Brian C. had confirmed the night before, he was there with Ricardo M whom I had met/ridden with during the 2010 SFR 400k. A few minutes later Ernesto M showed up, that was it, 4 of us. At 6:05 we started rolling' the temperature was comfortable. We got to the first fire road section, Coastal trail, when it was still a little dark and the fog and dust made seeing the path difficult. I've ridden similar conditions before and knew that the lower the source of light the better, my helmet light was turned off. 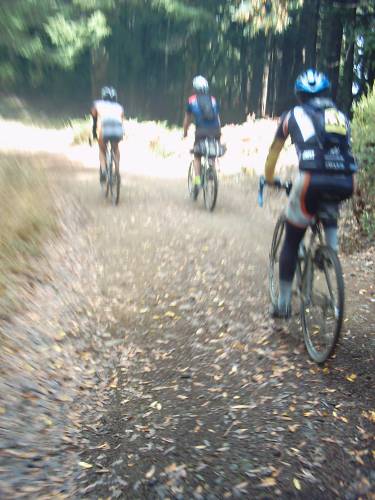 More fire road climbing ahead, Miwok then another section of Coastal, then down to Muir Beach and then our first control at the trailhead of Deer Park at Muir Woods Rd. We climbed together chatting all the way to the Pantoll Ranger station. After a short break and with happy water bottles we continued climbing now on pavement towards more fire roads of Mt. Tam.  Before we know it we were at Lake Lagunitas and soon after at Bofax heading towards Bolinas Ridge. Brian, Ricardo and Ernesto looked fresh and chatted all the way to the Bolinas Ridge trail head, I followed a little behind.

Bolinas Ridge was in good condition with some mud spots here and there. After a short while Ernesto, who was now behind me, told me to go ahead he was going to take it easy for a while, his leg was not happy. Brian, Ricardo and I continued together to the descent on Randall trail and I warned them on how smooth the pavement on Hwy 1 was after riding Bolinas Ridge, ahhhhh, smooth!.

On Hwy 1 Ricardo and Brian did most of the pulls, when it was my turn I managed to keep our speed up but not for too long. We arrived at Black Mtn Cycles 4 minutes late. John and Gabe where there visiting with Mike while he worked on yet another nice bike. While we ate lunch we bought at the Whale of a Deli Ernesto arrived. We spend a good hour there, when it was time to move on the legs did not want to go, but we were now on the return and the weather was still perfect. 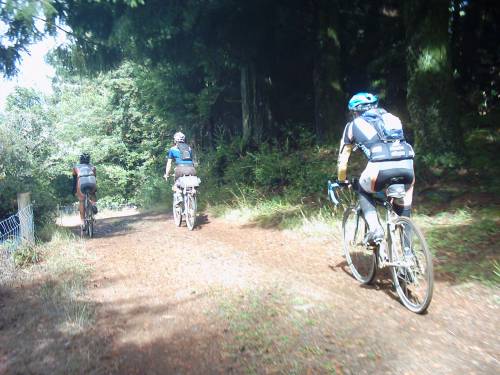 We all left together but somewhere between Point Reyes Station and San Geronimo Valley Ernesto slowed down and that was the last time we saw him. Later in the day he sent me an email letting me know he arrived home OK, he had cut the route short as his leg was hurting.

At the next control in Tiburon we had ice cream, coffee and some pastries. Riding from here to the Railroad Grade fire road trail head is always hard, we crossed the Mill Valley bike path and that makes it very tempting to just give up on the fun and take the shortcut home. We continue with our mission. Again climbing Rail Road Grade fire road I was behind, tired, tired. They were waiting for me at the control on the West Point Inn and after a break we moved on towards Pantoll/Panoramic Hwy and then the Marin Headlands.

I was always in the back but somewhat managed to keep Brian and Ricardo on view, I think they were riding slower than what they could just to let me stay close :) Brian mentioned he was not looking forward riding up Marinchello. Both of them climbed it and since it was getting dark continued down on Bobcat to avoid descending the fire road under poor visibility. 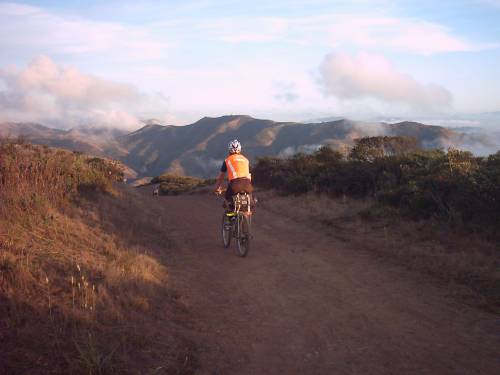 They were waiting at the bottom and we all continued from there to Coastal. It was gonna be close, making the last control at the Strauss Statue at South end of the Golden Gate Bridge would need some pushing the big ring.

I climbed as fast as my tired body could and tried to stay close to them, then crossed the bridge span to get to the final control a minute behind Brian and Ricardo. It was 5:30pm on my watch, I barely made it! This year the route was especially hard for me, I did not have a good year on the bike and every longish ride had been a struggle. Hope next year is a gentler one.