I do this overnighter most years, it is a far enough from home, and when I get there the beach is waiting. I discovered this park on my way down the West coast on my Seattle to San Francisco tour.

Left a little latter than what I had planned at 7:45 and right away I felt it was going to be a great overnighter. 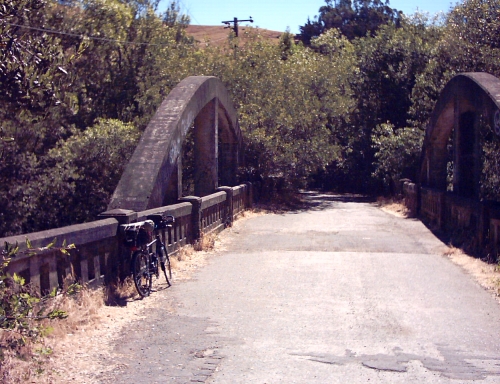 On the Golden Gate Bridge a rider (Chris?) approach me and we started talking about cycling, my little trip and his past life as a professional bicycle racer, he talked a little to much but the company was welcome. We rode together for a while until he finally left me in San Anselmo. From here I followed the regular bike route to Fairfax and then joined Sir Francis Drake towards  the Samuel P. Taylor park. Once you get to the park you have the option of riding on a bike path or continue on SFD I always take the bike path inside the park, so much nicer. At the park entrance the ranger informed me the bike path was about to be closed for repairs but I could continue and try my luck, I continued towards the path, construction had not started. 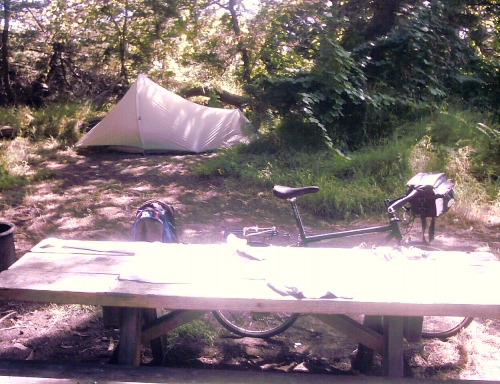 Right after leaving the bike path, back on the main road, there is a hill that takes you to Hwy 1 today I was in the mood for a change so I went another way. Platform Bridge Rd, a nice flattish road that connects to Point Reyes-Petaluma Road and then to Hwy 1, change is good. Once on Hwy 1 the miles flew by and got to Marshall by 11:30am.

(The Marshall store is one of the controls of the San Francisco Randonneurs Brevets, when you get there, your are on the way home on the last leg of most brevets.)

Had a quick sandwich and some tomato juice and back on the saddle I went. I like Hwy 1, many people don't like riding here but I do, granted it's not an ideal cycling road but as highways go this one is pretty decent. The next stop was at Valley Ford's general store for some more Gatorade, the last miles to Bodega Bay are marked with long rolling hills that break the boring staight line to the coast and I always get thirsty here, by now it was 12:30pm.  At 1:30 I was at the Bodega Bay store (a control of the San Francisco Randonneurs 300k) 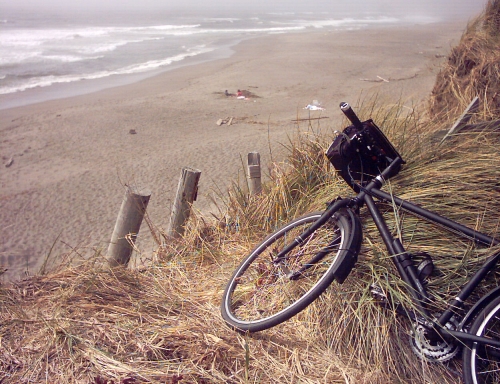 Whenever I do this overnight here is where I always get food for the afternoon/evening and some breakfast. The actual Bodega Dunes park is about 1-2 miles from the store so this is the perfect place to buy food/supplies, this store is popular with the RV crowd.

After taking my time at the store deciding what was going to be dinner, what to eat now and tomorrow I left with groceries inside my backpack and the rest strapped on top of the rear trunk. At 2:00 PM I was at the park, pitched the tent, took a hot shower, (yes they have free hot showers here) and went to the beach to relax. When I came back to camp I had a beer and read some free magazines I had picked up soemwhere. A while after, Jan, a tourer originaly from Holland but now living in Vancouver showed up. He was on his way to Tijuana from Vancouver, it was his first bicycle tour. 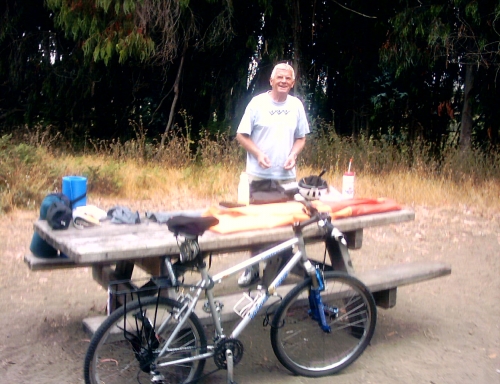 Jan was carring a lot of stuff including four different locks (cables, u-locks and more!) but he was having a good time. We chatted for a while until the darn mosquitos chased us to our tents.

Had a weird night sleep. A racoon woke me up as he scavenged the trash left inside the fire pit by previous ocupants of my campsite. Racoons never stop amazing me, they adapt to anything,  sometimes I wish I could do the same, ha, ha. 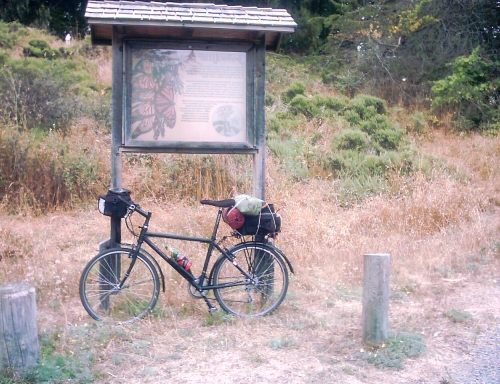 It was a little cold around 5am but after tightening the sleeping bag 's neck drawstring went back to sleep for a little longer.

By 7am I got up and started getting ready, It takes me about 30-40 minutes to pack and go, Jan came out of his tent as I was finish packing. We chated, took a couple of photos and then said goodbye. I went for coffee at my usual place a small cafe on the back of a strip mall about 200 yards South from the park entrance @ Hwy 1. I waited for Jan to get there as we had agreed but he didn't showed up after 15 minutes so I left. The morning was foggy and traffic was light giving the ride a misterious feeling I haven't tasted in a long time. At Vallet Ford the sun had come out and I was doing good progress. At Tomales I did a quick stop for Gatorade and quickly moved on. Miles were going by fast and I moved with little effort; didn't stopped at Marshall. 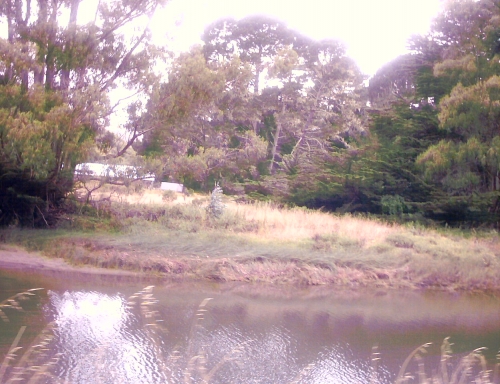 Flew by Point Reyes and then up the Olema hill, on the other side I rode Sir Francis Drake instead of the bike path inside the park, construction had started and the path was closed to all . Fairfax and all other towns came and went. Arrived home a little before 2pm.

It had been a nice overnight trip, great weather and nice roads. 149.87 Miles, 10:24 Hours rolling and about 12 hours total on the road. Got to do this more often.