Once the bag went on the bike the next thing in my head was "I need to put some stuff in that bag". Yeah an overnight bike camping load would take care of that. As in the past, I selected Bodega Dunes, a camping park with hiker/biker sites (no reservation needed for us and only $3.00!) that is about 75 miles from my door. The wife was going to be out of town for a week so that was a perfect opportunity to go. I woke up very early on Saturday, maybe to early and felt tired from a bad night sleep. Stayed in bed until 8:30 when I decided it was enough, I had to take a shower and go, the bike was packed and ready and calling my name. 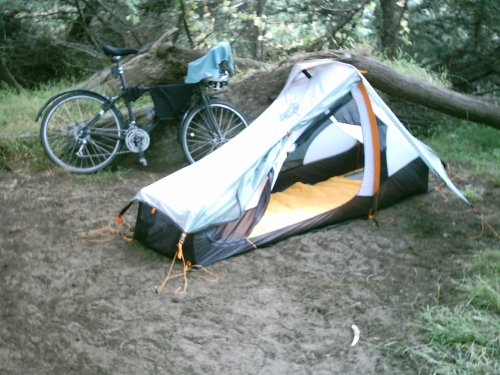 I like that Carradice Trax SQR bag a lot. it offers the right capacity for my type of touring is relatively light when compared to a rack/trunk or rack/panniers combos and I don't feel it when climbing. Since the bag has a 10 kilograms load capacity I decided to weight my load for this trip, at least the things I was loading into and on top of the bag. The Carradice Trax SQR with my down sleeping bag, sleeping bag liner and clothes inside weighted at 3388 gms, the REI Roadster UL 1 person tent 1533 gms, and the (old model) ThermARest Ultralight sleeping pad was 782 gms. A total of 5695 gms, 12.5 lbs. not to bad considering that, in my opinion, I am not sacrificing (my definition of) comfort at all.

On the way to Bodega Bay I ran into JimE (Cyclofiend) just North of Point Reyes Station, we chatted for a while, he was on a training ride for next weekend's (wrong! two weeks from now) Mt Tam century. some miles later I saw Joel V. Also fellow San Francisco Randonneurs member, we both reacted a little to late to stop but acknowledge each other. After climbing out of Tomales I stopped at Valley Ford for water, as I was taking a short break a group of riders with bikes with reflective tape on them showed up, I recognized one of them, it was Bruce B. also fellow San Francisco Randonneurs member on a training ride with other randonneurs I did not recognized. I think all of them are bound to Paris to participate on the 1200k PBP.

After stopping at the Bodega Bay supermarket for food for the night I arrived at the campground at about 4pm. Pitched the tent for the first "real" time ever (I did pitched it last year at the San Francisco Marina Green after I bought it) and took a hot shower. Perfect. There was another biker there, she was riding from Vancouver to San Francisco, moments later another rider came, he was riding from San Francisco to Oregon. We all say hi and went on to do other stuff. I went in my spanking new tent to see how comfortable the thing was. 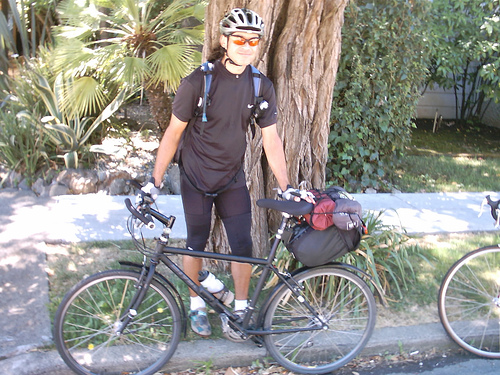 Next morning I woke up early but after spending some time chatting with other tourers while eating my powdered donuts and OJ, I left at 8:45 towards the coffee shop in the tiny shopping mall 300-400 yards south of the entrance to the park. After a double espresso and a banana bread slice I started the riding at 9:00am. In good Bodega Bay fashion the morning was very foggy, time to turn the blinker attached to the bag. As soon as I crested that first hill the sun was out. No head wind this day, that always helps. By 10:45am I was riding in front of the Marshall store where I have had lunch the day before on my way to Bodega Dunes. It was to early for lunch so I kept going. I was doing at a good pace. A few yards before downtown Point Reyes Station I saw Joel V again! this time we stopped and chatted for a little while. Like Bruce B. and many other SF randonneurs he is training for PBP. After that I was going to stop at the Bovine bakery but that dammed thing was to busy, I can't stand lines so I moved on to take a break at Samuel P. Taylor (SPT). After filling my backpack bladder with watter I continued for a few minutes before running into Patrick S. another fellow SFR bound to PBP! SFR's where on full force today. We chatted for 20 minutes or so and then I left with a smile on  my face. It is good to run into familiar faces over here in the semi-boonies. After leaving the park I rode the boring stretch to Fairfax where an ice double espresso and scone where waiting at the Java Hut. This is one of my usual stops. Right before San Anselmo I ran into yet another SF randonneur, this time JimG! We spend close to an hour talking about my trip and future overnighters, bicycles and the rest of the stuff we always talk about, nothing, just like Sienfield. :)

After that last encounter the ride went just back to normal. By 3:06 I was at the door of my building garage. Another great bike overnight trip. I'm ready for the next.
Today's numbers
73.57 miles
4:51 moving
Average Speed 15.1

After taking a shower I downloaded the photos from my Aiptec SD 1.3 megapixel camera. I could not hide my disappointment when I realized most of my photos where blurry. At some point I had moved the lens on the camera to the macro mode. One of the photos here is courtesy of JimG.
(First posted July-23-2007 at 08:03 pm)