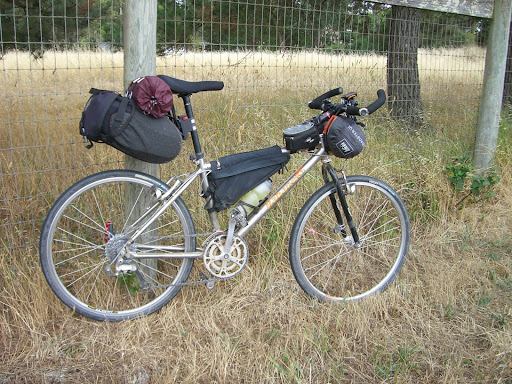 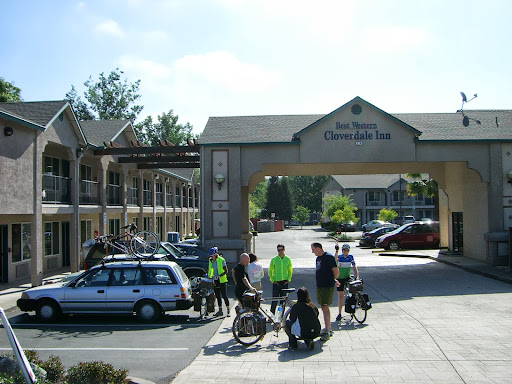 From the top of the hill down to the Andersen Valley we spread out. I rode near John who was carrying his whole house on the panniers. It was a wonderful clear day and we were going to be riding on a road with many ups and downs soon so I though I would check for water at the Yorkville Post Office. Sure enough there was a spigot on the left side of the building. By now I was ahead of Ian, Juliayn and John, Gabe was a little further ahead. I stopped on the side of the road and let them know of the water source.

In no time we were at the bottom of Fish Rock @ Hwy128, from here on it was all new to me. Fish Rock climbs steadily for a while, and then there is a number of small rollers one more descend and one more longish climb. Eventually pavement ends and gravel takes over, I thought that was a good spot to wait and regroup for my friends. Ian came a little after me and then Gabe. The three of us waited and waited some more but Juliayn and John did not show up for a while. After about 30 minutes Ian decided to check/hike up a little hill to see what was up there, Gabe and I follow. They both continued to the top of the hill and I sat at a great vintage point and waited for our missing friends to come.

After 45 minutes they rolled in. Juliayn had had a flat. It was now pass lunch time so John started taking things out of his panniers and made us some salami/cheese sandwiches that hit the spot perfectly.

Descending on the wide fire road was fun. I was making sure not to go too fast and avoiding larger rocks at the same time but after a while my relatively skinny 1.3"x26" tires combined with the weight of my gear proved no match for the fire road and I got a front pinch flat. 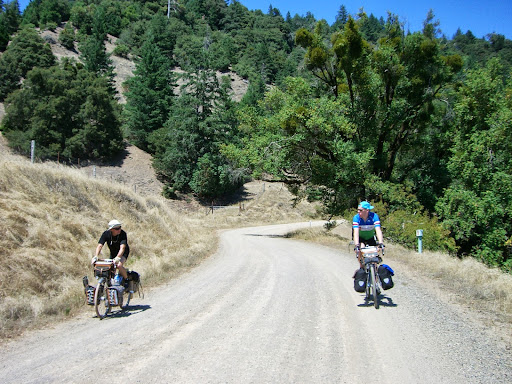 After fixing it we rolled together for a while till the next climb, a longer one that separated us again. Then there was a very long and steep descent that went for a while. I was starting to think I had made a wrong turn somewhere but I had not seen any large intersections, weird nobody was close to me. I kept descending and figured I had camping gear and some food and plenty of water so I had nothing to loose by keep going down. Even stop for a while to wait but my friends did not showed up. Finally pavement! Yet one more climb and this one steeper than before or perhaps I was tired by now. At the top was Old Stage Rd and a place I waited for the others.

One by one came and by the time we were ready to move I could see the fog going over the road ahead. Temperature was also much cooler here than before, we were just a mile or two from the ocean. As we moved South the fog became thicker and by the time we turned right, just a few miles ahead, it was time for jackets. Pacific Woods descend into Hwy 1 was steep and cold.

We regroup at the bottom and then went on to one of the two supermarkets in town. The second one we stopped was a pretty fancy one, rivaling Whole Foods in the city and had the slowest deli service ever but they had a good selection of about everything we could want and then some. The campground was just a mile or so ahead of off Hwy 1. When we got there I was ready for something warmer. The ranger offered us a full site campground and since it was just a few dollars more than paying for a hiker biker spot we took it.

Pitched up the tent and took a refreshing shower. Ian went and bought some firewood and we were set. Except two riders who were on the Hiker-Biker site and had talked to us when we arrived, thought we were their best friends and decided to take over our fire. Normally I do not mind sharing with others but one of these characters was a little too much and just plain annoying talking about politics and religion, go to hell man I am camping! leave us alone I thought. I should have said something but I was tired I guess. Eventually we were alone and had a nice rest of the evening. 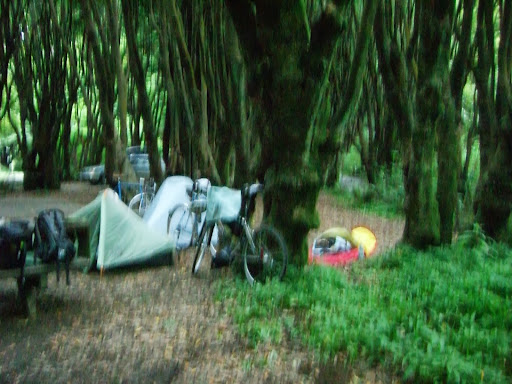 DIA DOS
6:00 and I was wide awake after a good night sleep. It would take a while for others to get out of their cocoons. While I waited I ate the pastry I had been carrying all day yesterday. It tasted ok but I was ready to move. It took a couple of hours to get us going and when we moved we were headed in the opposite direction of our destination. We were going for breakfast at a taqueria Ian had stopped on his Fleche earlier on the year. The guy at the counter was supper nice but my stomach was very upset and I was not feeling good at all, that freaking day old cream on the pastry I bet! I ordered a burrito but ate only half and packed the rest for later.

I lead the group slowly on Hwy 1, it was a little cold but we were all dressed accordingly so no big deal. I was not much of a companion during this segment; I was feeling real bad like returning to nature the burrito I had eaten earlier and almost stopped to vomit, not another way to put this nicely. At Skaggs we stopped at the store and after visiting the restroom and getting some water I took over a whole bench for a nap. Me feeling bad. I went to the back of the pack and tried to keep with the group but my head was in another place, fighting my malades.

Gabe had a nice route alternative to avoid the climb before Jenner on Hwy 1 but I was not on condition to do it and told him I could just meet them at Bodega Dunes. Don't know what happened but we all continued on Hwy 1 and I continued on the back, trying to stay with the group. On the long couple of climbs before dropping down into Jenner I just did not have it on my, my stomach was very upset. I slowly made it to the top of one and then another hill. John waited for me at the top of one and then after we were rolling again Ian cheered us up with his best serial killer moves a la Tour de France crazy-fan, pretty funny having him running next to us on the hill screaming crap and obscenities very close to our faces while we struggled to stay upright. For a moment I forgot how crappy I was feeling. 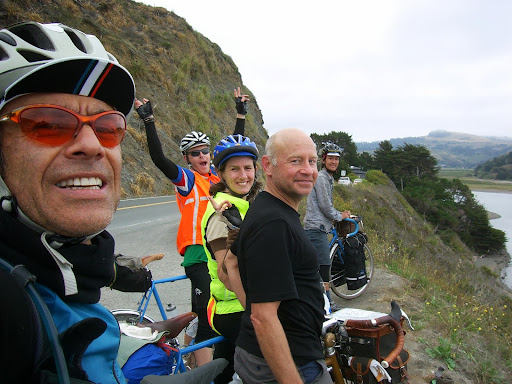 At the top John came up with the idea we could stay at Ian's parents near Guernville instead of camping in Bodega Dunes. With the excuse "Carlos is sick, it would be good for him" he sold the idea to us. I told him not to blame me, I would ride like that to Bodega Dunes. At the end, while we stopped for a short break in Jenner, Ian called his parents and they agreed to receive a bunch of sweaty riders to stay overnight at their home. We got to their home and his mom greeted us and pointed the beer in the refrigerator. The house has a great deck where we sat and chatted for a while until Ian's father came. He had bough pizza and more beer for us!

After a couple of hours Ian started to say goodbye to us. It turned out he had made plans ahead to ride to his parents and they were going to drive him, the same evening, to San Francisco so he could go to work next morning. His mom drove him and we enjoyed the hospitality of his father. More pizza and one more beer while exchanging cycling stories. It was great evening and I think we all agreed John's crazy idea turned out to be a very good one. However we (at least Juliayn and I) did not realized Ian had to leave the same evening.

That evening, I sleep in the guest room while Gabe, Juliayn and John slept in the living room.

DIA TRES
A great night sleep except John farting early in the morning, I heard. When I got up everybody was already around the kitchen table having coffee. I served myself and then we had breakfast cook by Ian's dad, we were spoiled. I think we left their house at 10:30 or so and we would be riding Bohemian Hwy, then Chileno Valley Rd, Wilson Hill, Platform Bridge to Sir Francis Drake and stop at Fairfax for food. My stomach was acting up again and I had just a burger, no beer. Gabe suggested we took the ferry into the city, instead of riding those last miles though Southern Marin. We took the ferry from Larkspur into San Francisco which turned out to be a great idea. It was a nice way to end a great weekend trip.