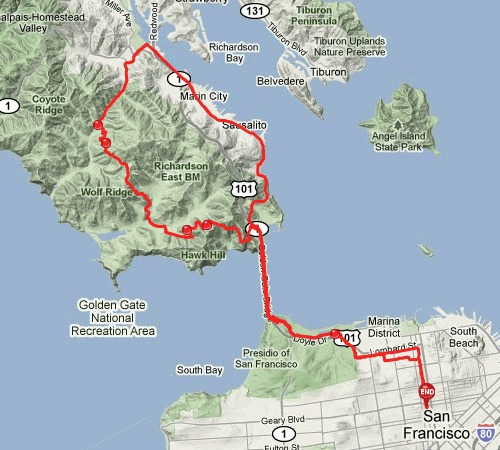 My wife apparently did not believe me when I told her I was going to get up the next morning (August 28, 2010), put on my trail running shoes, go out our front door and run 26 miles. 9 am came and I was still in bed, but I was going to go as planned and run the same route I do so often on the bike. A shortish ~27 mile loop that takes me 4.5 miles on city streets to the Golden Gate Bridge, then across the span and up the "popular with tourist and cyclists" Conzelman Road. From there I would take the Coastal Trail fireroad down to the valley on the other side and then either connect to Miwok stables either via Bobcat or Miwok trails. After that then return to San Francisco by joining the Mill Valley bike path, Sausalito, Golden Gate Bridge... Oh yes, for the last year or so  I've been cycling alone or with friends on Saturdays and running with the wife 6-13 miles on Sundays. Wine consumption has remained at the same level :)

I approached this as a bicycle randonneuring event, to go at a pace I feel I can maintain for longer than what is needed to complete the route and to listen to my body when I am hungry, thirsty and/or tired. Not being a fan of pavement, I was looking forward to getting to the fireroads, this helped with the monotony of the first miles to the bridge. Once on the GGB deck things change, it is nice to see things at a different pace, perhaps half the speed of cycling. I had calculated it would take me between 4 and 5 hours to complete the route that on a bike I do in 1:45 - 2:10 hrs, double the time it takes to bike it. 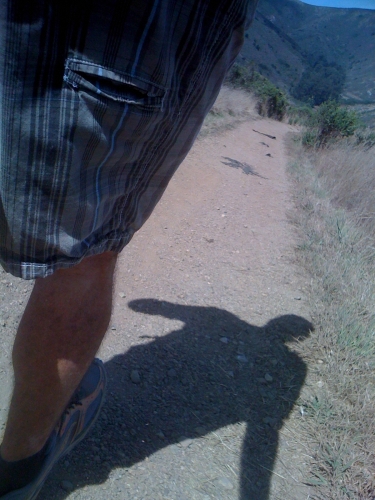 Surprisingly I felt very well during the whole run and did not fell tired until the last couple of miles in San Francisco. Made it in one piece, I thought, but when I looked at myself in the mirror at the entrance of our condo I saw a bloody t-shirt, my right nipple could not take all the up and down friction of 26 miles. It did not hurt, but the blood was there; oh well, a battle scar. I've seen little nipple patches advertised towards runners, always thought it was silly, now I know is not.

I used a small camelback for water and storing food and the layers I would take off while running, other than that a walk on the park. Really.

In the end I thought it was a nice run, exactly 4:30 minutes on the watch. As a cyclist I felt easier for me than say a hillier 200k brevet such as our beloved San Francisco Randonneurs Lighthouse 200k event. Fun. I could not walk comfortably the rest of the afternoon when the wife and I went to get lunch, however the next day I was just fine. Will I do it again? sure, anybody interested in running 26 miles with me sometime this fall or winter?

The GPX file is here.