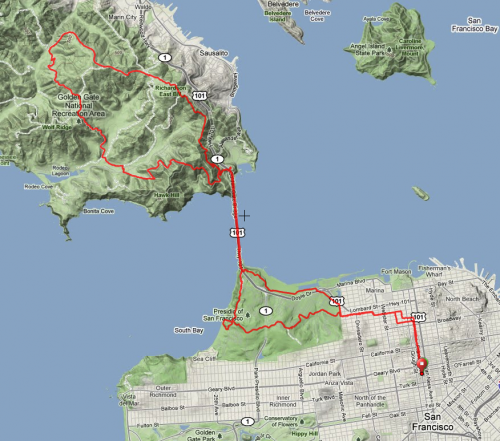 A busy month this one is. This past weekend I did the SFR 400k workers ride and had a hard time because my body has been feeling drained of mojo, but after what felt like a very short week it was Saturday again and it was my best chance to squeeze in a ~26 mile run this month. In the evening I would be fulfilling my volunteer duties during the four hour (10:00pm to 2:30am) first shift of the final control of the SFR 400k. I better get my things ready and leave.

Very conservatively I ran to the Lombard@Lyon Presidio gate and then continued to do a small 5 or so miles on the trails before heading to the Golden Gate Bridge. This loop added more climbing than what I wanted but it was a nice break from running on the streets. I went up Arguello and then followed Washington to a place where there are stairs that connect to the Sand Ladder that descend onto Baker Beach. From the beach I came back on a connector to Lincoln and then continued to the bridge on other trails, very nice route that I usually do starting from Crissy Field. In my head I had added 2 miles to the route, so I would not need to run to the beach and back from the Tennessee Valley stables.

The bridge was packed with tourists, a little unusual but then I realized it was later than my usual time crossing it so it made sense. A couple of runners passed me on the deck and then one of them ran out of gas and stopped, the other kept sprinting to the other end of the bridge, I was keeping my steady pace. Once I crossed to the west side to start the "trail-only" part of my run I noticed the "just finished" parking area on the North West end of the GG Bridge, they did a good job.

I was feeling that I was not making good progress, but there was little I could do other than continue moving which I did without rest. On Saturdays there are more cyclists on the GGNRA fire roads than any other day of the week; lots of single riders including an unusual amount of women, I guess the spring weather brings them out :-|

Back to the route. From the North West parking lot of the GG Bridge I went up on Coastal to SCA trail and then to Alta trail and then connected onto Bobcat. Ran Marincello down to the Tennessee Valley (Miwok) stables and went back up on Old Springs trail to Miwok and back down to the valley floor where I made my first stop. After a gel and a few electrolyte capsules I climbed Coastal to Conzelman and then descended to the Bridge's North East parking lot. The place was now filled to capacity with cars waiting for others to leave. I refilled my now empty 100oz water reservoir, had more electrolytes and resigned to be back on the pavement. These miles are also the hardest because I am already 20 miles into the run and the drain of traffic noise gets to me.

After nearly 5 hours I returned to my place. Tired but not as exhausted as last time. Now I have a week to recover before a gentle mixed terrain ride next weekend and then a 360k Fleche the weekend after and then the 600k workers ride the one after that. So far so good, but it is not going to be easy...