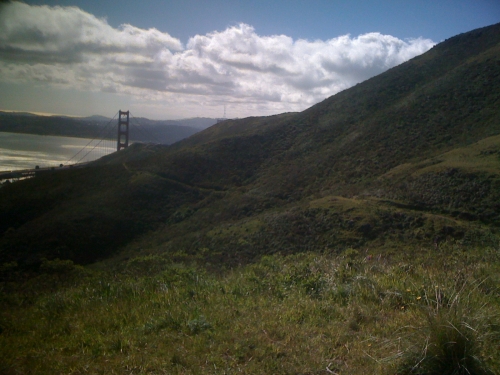 First I was sick then there was rain and the SFR 300k workers ride so this was the last chance for me to do run a marathon during February. I had gone for a short ride the day before and felt tired climbing Conzelman, a hill I can do with little effort most of the time, so I had some reservations about the marathon idea. Still I had to at least try before deciding not to go. Once more I was out the door and running at 9:00, the sun was out and it was a little cold, in the 40's, but I was prepared.

After just a few blocks I knew it was going to be a different experience than last time when I was tired from the start. I was actualy feeling pretty good. By the time I got to the North end of the Golden Gate Bridge, about 5 miles from our place, I was feeling very fresh and it was decision time, do the route I had done the previous time backwards (Sausalito Headlands GG Bridge) or do the headlands fireroads and stay away from Sausalito.I slowed down for a few seconds and then I remembered this little trail that is closed to bikes that goes from the parking lot to Conzelman, lets go that way. Once at Conzelman I saw the trail continued across the road so I went to check where this mystery trail (part of the Coastal Trail) that I see at least a few hundred times a year went. SCA trail! cool, I know where that is and it will keep me away from the road for a good while. 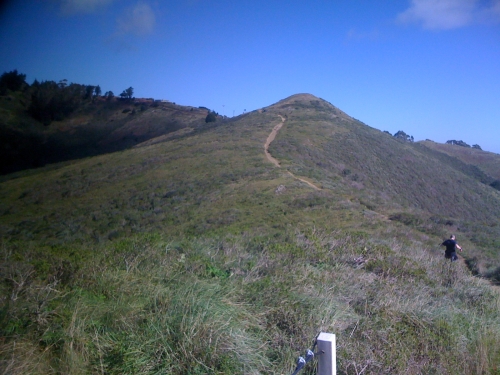 This hiker only trail climbs on several switchbacks to a ridge and then continues climbing a bit more until it levels out and then cuts across a hill that connects to SCA trail. I saw two other runners on that section. Then this connects to Alta trail another familiar trail I had run a few times before. Alta connects to Bobcat, now we are talking multi-access fireroads. I climbed all the way to the antenna and then went down the steep Miwok all the way to the valley floor about 1000 feet below. Another stop to check the time and do distance math in my head. The sun was still shining and I was still feeling pretty well. I figured I needed to add a few miles before heading back to the city so I decided to go to Rodeo beach that would add at least 3 maybe 4 miles.

The beach was crowded but there was still plenty of parking spaces to be filled. I was wearing my SFR vest and got a few looks from cyclists, or at least that is what I thought. The legs were fine but the hip was bothering me a little. Putting my hands on the sore hips while running helped and soon the discomfort was gone. It was now near noon and more cyclist were on the trails and road, I was going in the opposite direction of most of them. Climbing coastal trail was a treat with the cool temperature and sun it was just perfect for running. 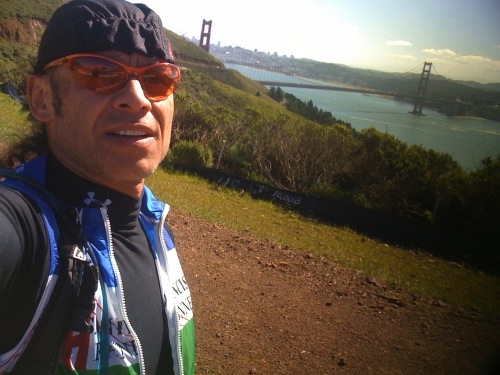 My GPS had stopped working and I hoped at least some mileage had been recorded, I tried to restart the unit but it was just not working so I just put the damn thing away and descended on Conzelman road towards the bridge. Now to face the obstacle course that is the pedestrian East sidewalk of the Golden Gate Bridge on a sunny Sunday afternoon. At the South end I refilled the water in my camelback and was happy to be a few miles from home. 1:25pm I was back in the front of our building stretching. I was tired but not exhausted as last time. Just took a shower and walked to my usual greasy burger place. It had been an easy marathon this time, hope next month is the same or better.

When I came home I noticed part of the sole of this, my first trail running shoes (Saucony Guide TR) was peeling off the main sole, they have ~200 miles on them so I guess I found the life span of trail running shoes for me. I like them a lot and probably will get an identical pair if I can.  Oh yes, a few days after this run I got a nice nasty cold that send me to bed for one two three days...