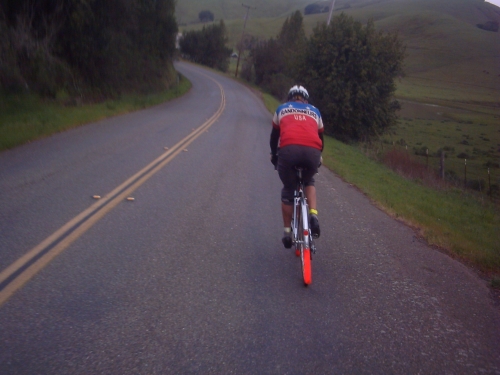 Running a marathon each month is not that hard; what is hard, at least for me, is to work it into my schedule that also allows me to ride a full brevet series... of doing only the worker's rides offered to volunteers. The 26 miles of a marathon have increased my threshold for pain, or so it seems to me. However, with brevets going on at the same time my recovery time between workouts has been reduced to a point where I have no margin for error. I learned the hard way how important being rested is before embarking on what for me is a fun SFR 400k route.

So, in March I ran a marathon on the 20th and then the next weekend I did an easy paved loop in the Marin Headlands and the next day rode to Point Reyes Station with Greg at what was supposed to be an "easy pace with few stops". Well the easy pace was not so much and by the time I came home I was more exhausted than I have been in a while. All week I tried to relax and keep the physical activity to a minimum, but Tuesday and Wednesday I could not sleep at all and I knew I was in trouble as my body was not happy with the lack of proper rest to recharge my batteries.

Friday night I went to bed at 11pm and then woke up a couple of times to pack stuff I had forgotten. Another bad night of sleep, I was a wounded randonneur. 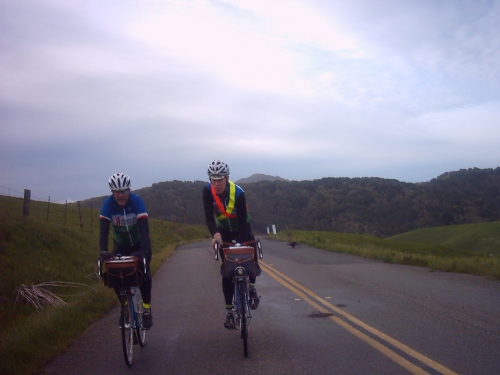 We started at 6am at the Golden Gate Bridge as usual, but this year the route had to be modified to accommodate for a bridge sidewalk closure that would happen on the day the regular event is run. As per RUSA rules *all* riders, that include the volunteers doing the ride before the event, must ride the exact same route. We would take a "side trip" from Hopland to a point in the middle of nowhere to get the answer to an Informational Control then ride back and rejoin the normal route, the length of the detour was ~6 miles. The other significant change was the location of the Final Control. Instead of finishing the ride at the same place as the start location (South end of the Golden Gate Bridge) we would finish at the 7-11 store in Sausalito, about 5 miles from the regular finish.

I was tired from the get go, but not to the point that I could not ride with the group of 7 riders doing this workers ride. I knew all riders well except Gabrielle who I had briefly met and rode with during the 300k workers ride the month before. After the first hill of the day we split into two groups that would remain constant for most of the ride, John P, Gabe E, Brian C, Rob H and I in the front and Willy N and Gabrielle.

Before Nicasio I lost contact with the group. I was riding within 100 yards behind them, but could not close the gap. At Hicks Valley Rd where they where waiting for Me, Willy and Gabrielle, the gap had opened to maybe half a mile. While we now waited 5- or so minutes for Willy and Gabrielle I had the opportunity to rest and felt a little better. Once they arrived we continued into a mild head wind. I did one or two short pulls here and there, but Brian and John took turns doing most of the work pulling us to the first control in Bodega. We all knew what was coming up, Joy Rd, I drank an Ensure. 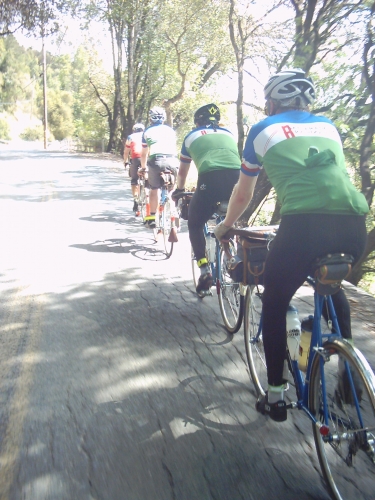 well, that is how I remember the conversation :)

I took it extra easy climbing as in my fragile state I had to conserve all energy I could. I was climbing last and could see them 50 yards away all the way up to the top. Where the road curved to the left a little I lost visual contact, when I reached the top I realized they had decided to continue without waiting. I was not happy. From the top of Joy Rd it is about 10 miles to Monte Rio on Hwy 116 mostly downhill, but there are flat sections that when tired make you wish you were riding in a group to get the benefit of drafting.

Entering Monte Rio a cyclist standing at the bridge that crosses the Russian River warned me of cops ticketing cyclists at the stop sign a couple of blocks away on Hwy 116. I thanked her and continued. What is it that I see in the distance? A stopped police car with flashing lights and a bunch of reflective tape standing on the side of the road? Karma I thought, my runaway compadres had been stopped by a Hwy Patrol officer for failing to do a full stop. When I got there I complained "thanks for waiting a minute for me guys!" The cop was now returning with their drivers licenses letting them go without a ticket, just a warning, and also making a point to let them know that they were now "in the system", whatever that means. Fortunately no ticket.

We were moving again but the mood to the Guerneville Control at the Safeway was grumpy. I got my now routine potato soup and as usual it went down very well. More grumpiness on the miles to the Westside Rd turn, the nice road eased things a lot and in no time the mood changed. 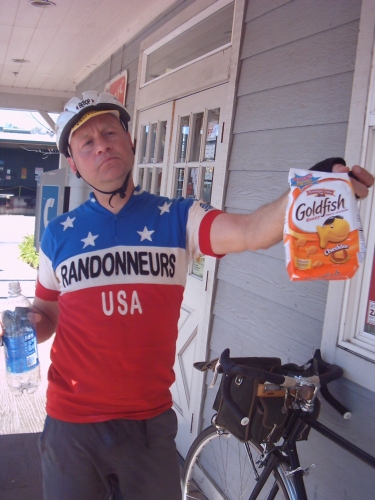 "Are we gonna stop at Cloverdale?" "Maybe" a few yeas and nays but no decision was made. When the time came we did and I am glad as I was running very low on water. I always stop here at one of the gas stations in town (mile 114) for a little break and water/food before heading the hills before Hopland. I felt I had reached a point where I could ride at a similar pace to my now relatively tired partners. We all were commenting on how this year the ride seemed to be much harder.

We climbed on Hwy 128 towards Mountain House Rd, I was feeling ok. At the top we waited for Rob and John and then continued to enjoy the prettiest part of this whole 400k, Mountain House Rd, so tranquil and scenic! The Hopland Control was just ahead.

At Hopland a slice of greasy pepperoni pizza hit the spot, as we were getting ready to leave Willy and Gabrielle arrived. Now for the little detour to count not so obscure things for that magic answer to the Informational Control. "Ah ok, that many so lets go now..." Oh crap my bike computer is dead again, it seems it is time to start shopping for a new one; oh well it is not like I need it that much anyways.

Tracing back our tracks we rejoined the regular route. Recent rain had deteriorated the roads at many places but traffic was light. At 7:15pm it was not dark yet but we were at Geyserville it was as good a spot as any to put on our reflective stuff. I was the last one ready and the fresh lithium batteries of my tail light were WAY too bright, according to John :) We did a couple of restroom stops during the night, once we passed Chalk Hill it was all flat to Petaluma. Are we there yet? I keep nagging, long boring flat miles. 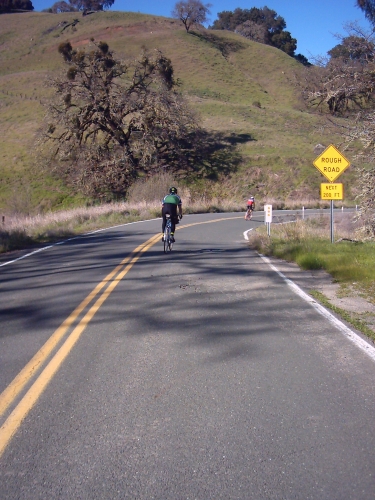 We got to the Petaluma Control at around 10:50 pm, there were some kids outside so I thought it was prudent on my part to stay behind checking on our transport machines while the others went in. The kids left so I went in and bought a banana and some salty chips. A civilian-dressed cyclist had been talking with Rob regarding our ride and was kind enough to pay for Brian's and my groceries, I think he also paid for Rob's. We thanked him and went outside to eat our food.

That hill out of Petaluma over to Nicasio is not too fun with a little over 200 miles on our legs, but we managed. Then the Nicasio hill and we're just two hills and ~25miles from the finish. The miles from Fairfax to Sausalito went fast and at 2:25am we were done... at least with the official brevet route.

Gabe had arranged for a ride back to San Francisco and had room in the car for one more rider. John asked me if I wanted to take the ride but I declined and told him to do it. Rob's car was parked just off the South end of the Golden Gate Bridge and he was giving Brian a ride to the east bay. John, showing signs of weakness, accepted Gabe's warm internal combustion and plush ride up Alexander Ave to the bridge and then to his place in the city. I think he is weakening/softening as a randonneur and we are going to need an intervention to save him, otherwise next thing you know he'll be stop helping Brian pulling us on those head winds. No sir that will not happen. 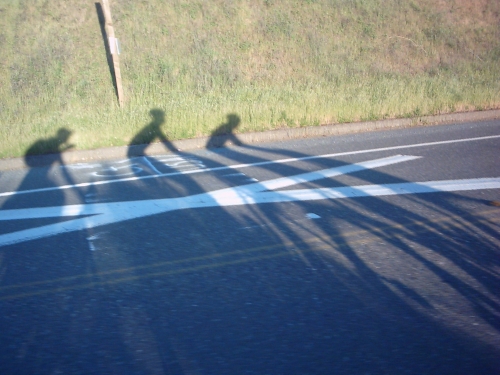 I told Rob and Brian I was going to climb slowly to the bridge and if they wanted to go ahead I would be fine. They climbed just ahead of me and we all arrived at Rob's brevet-mobile together. We exchanged our thanks and goodbyes and then I rode the last ~5 miles home to a warm shower and cozy bed. A cup of noodles and went to sleep.

Just one more ride for John and I to complete the Super Volunteer Series (a full series of brevets, 200k, 300k 400k and 600k, done as volunteers/workers rides) The 600k is less than a month away. I may have to run two marathons in another month as in April I have the Fleche (360 kms minimum) ride in two weeks and the weekend after that the 600k workers ride, so we'll see how this busy month goes and how my body copes with the schedule...