When I first read the 2009 San Francisco Randonneurs schedule of events I was pleasantly surprised to see a night event had been included. Back in August of 2007 I wrote here about my SFR wishlist and that was one of the wishes I had. I realy enjoy riding at night, there is that warm-happy-feeling I get when moving silently in the dark. I was looking forward to this event. The only minus I saw was that the start/end was in Hercules instead of the Golden Gate Bridge, but hey, I would be riding a night with a bunch of friends. 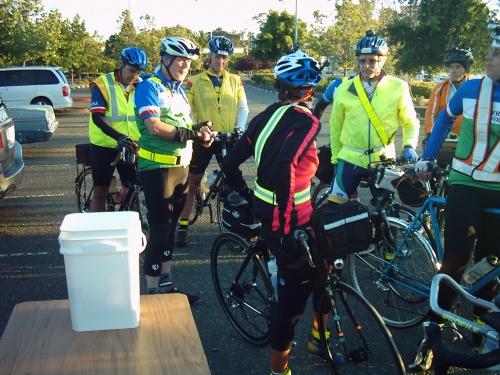 Not liking to drive to ride but being to o lazy to take public transportation I went for the worse of the two and decided to drive. I emailed JimG letting him know I was going to drive and asked him if he was going to do the event so we could carpool. After a couple of emails we agreed he would drive. I made plans for my Friday and Saturday before the ride that included, working from home, eating decent pasta meals and just relaxing as much as I could, as I always try to do before a brevet. I took a long nap Saturday afternoon and then I rode to Jim's. We went for a burrito, of which I ate only half and stashed the other half as a meal for later during the ride.

We arrived a good 40 minutes early and most riders were already there. As soon as we parked next to his Brevetmobile, Willy N. asked if we were interested in a pair of wooden fenders, me, me, me! I have always liked them but it is one of those things I would not purchase cause I'm cheap that way. 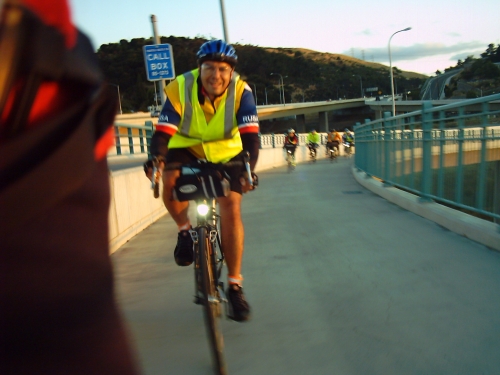 He pass'em my way and warned he did not want to see them in his hands again. We both were happy.

About 20 riders started the event. We rolled at 8:00PM and the group stayed together for a while, even after Kitty G. got a flat, but as it always happens on the hills, the group broke into two or three smaller sections. Our front group was about 10 riders and the pace was very comfortable. Richard M., and Tim H., set the pace while Todd T. provided the navigation. I was just there taking space most of the time and absorbing as much of the night ride as I could.

A couple of weeks back I had a hard time during the 600k because I had not being eating and drinking enough and I ended up very tired and not able to ride for long with the different groups I was part of. During this 200k I had been wearing a digital watch that I set to beep every two hours to remind me to eat at a set intervals. This trick which I picked from Greg B., worked perfectly and I will definitely use it again.

The Controls came fast one after the other and before soon we were at Davis, the return point. I had my half-burrito, a banana and fruit juice and was ready to go at the same time as everybody else. When we left the Control Jim and Jaime G.(visiting from San Diego!) were up in front. A nice pace, but I was worried Jim was overdoing it. 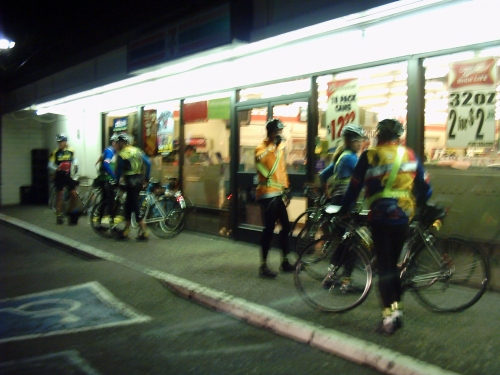 There were about 50 miles from this point to the next Control and Richard, Tim and Todd eventually made it to the front of the pack at which point the pace picked up considerably and for a good while. Now Jim and Jaime were at the back. Rob was with them, I think he was having some stomach issues but was still able to keep up.

Near Lake Solano, Rob sprinted to the front to ask the leaders to take the speed down a notch. The pace slowed down for a while but then it went up once more. Rob announced a restroom stop and most of us took advantage to conduct our business under the cover of darkness. I thought Jim and Jaime were there with us but they arrived a little while after. When we resumed Rob told me Jim and Jaime were tired and he was going to ride with them and asked if I was going to ride with them. I figured Jaime and Jim were evenly paced and Rob knew the route well, so I decided to go with the others. I ride with Jim often, not during brevets as our pace tends to be different, but we do a lot of weekend rides together so I figured if he needed help I would know.

As soon as we split Tim got a flat giving the two groups the opportunity to reunite but when we started up again they stayed behind. My legs were not that tired and the temperature was in the mid 50's, very pleasant, I was feeling fine. We got to Cordelia where the Arco station was our next Contro, I got some coffee and an energy bar. 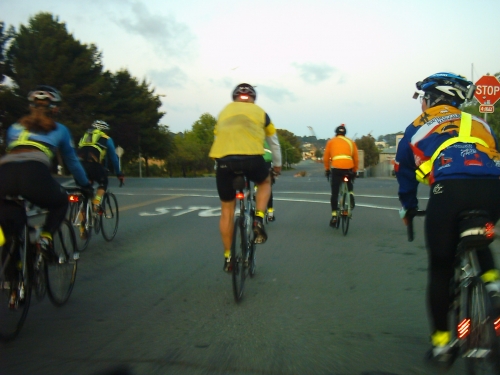 While we were there Rob, Jim and Jaime came in, Jim was not looking good, I asked him how he was doing and he said he was very tired and wanted to puke. Jokingly I pointed him to behind the building to "a good spot to puke." I've seen him tired before and he always pulls trough the bad times.

We started again, now with just under 30 miles to go, Rob Jim and Jaime stayed behind. The new day was waking up and we could now see farther than what our lights would shine; the road started climbing gently but the false summits were driving me crazy. My butt was bothering me so decided to stand up on the pedals to rest while climbing and that worked well for this section. We sailed through the next few towns, crossed the Zampa bridge and approached the few miles to Hercules as a mass of slow moving reflective tape.

On the last descent to the parking lot where we had started the night before I heard screaming, it turned out Bruce B., who was doing his share of volunteering for checking in riders at the last control, was walking Kramer (as in Seinfield), his friendly collie, while waiting for us and was as surprised to see us a little early as some riders were to see him with his dog a block away from the finish. 10:17 hrs had passed since we started the ride. 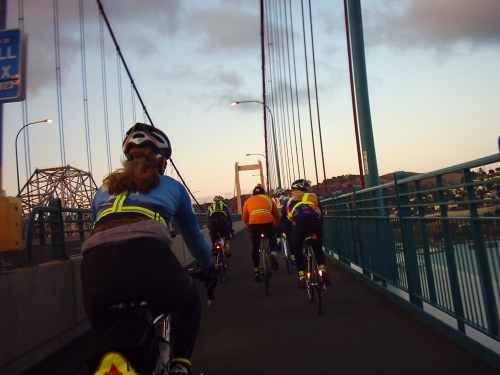 After all paper work was taken care of most riders stayed there for a while. Rob, Jim and Jaime came after a couple of riders. Jim was looking bad so I suggested he eat something and take a nap in the car. When he woke up he was feeling better. Still many riders where hanging there chatting and laughing, we waited until the last two riders came in. I was happy to see Mark B. riding, it seems he's always there volunteering in some way at the events and does not get a chance to ride them often.

It was time to wrap things up, we helped pack the leftover food, the table and chairs and other stuff into Rob's and Bruce's cars and then drove home. A very pleasant brevet. I am all for doing more of these overnight short events.

Here is the GPX file with these and other photos geotagged and placed on the track.
JimG's photos are here.
The results are here