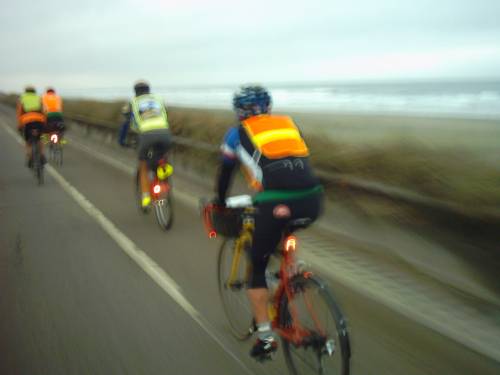 A DART is a randonneuring event in which teams must complete a distance from 180km to 359km. Teams start in different places and converge in a single finish location.

A hard year 2011 has been for me, but I have always wanted to participate in a DART event. A few years back I suggested that our club, the San Francisco Randonneurs (SFR) should expand our ride offerings to do new events that had yet not being offered. Randonneuring is a great sport, but riding the same events over and over, year after year can get boring after a while. The Santa Cruz Randonneurs were organizing a DART this year so when talk of doing a mixed terrain DART route started in the sfrandon mail list I was interested in joining the team. Heath A. became team captain and with the help of Nick L, Brian K, and others he mapped an ambitious route. After the route was set we settled on the final roster of team members, Heath A, Nick L, Brian K, Sean C and I (I was the last to join).

We started at 6:00 am at the Strauss statue at the south end of the Golden Gate Bridge and headed south on city streets crossing San Francisco and hugging the coast as much as possible until we got to Pacifica where we went inland on what used to be Hwy 1 decades ago. This section now call Planet of the Apes (PoA) is a narrow, ~6 feet, path of broken pavement and dirt that climbs steadily for a few miles and then descends onto the current Hwy 1 right before Montara, the whole PoA is beautiful and highly recommended. We continued on Hwy 1 South to our first control at the Safeway in Half Moon Bay where we all had a snack. 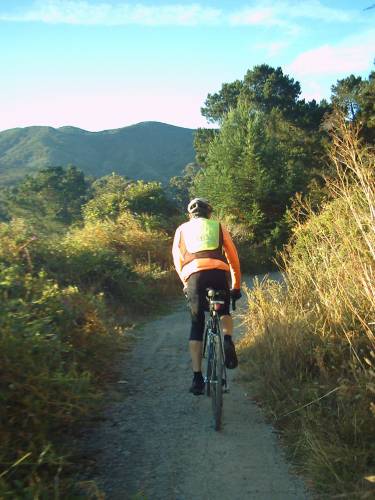 Some serious climbing was ahead of us. Purisima Creek is a fire road that starts gently and soon has you climbing on sections where there is barely any traction, steep, steep. That was fun eh, glad we are at the top now! We joined Skyline Blvd. and headed South for a few miles til we got to our next control at Skywood Trading Post. One more receipt/snack stop but we spent a little longer than necessary here, we would pay later for that. We continued south and then descended into Portola State Park for yet another control. This is a nice park with camping sites available, a future camping trip there is on my radar.

Moved on to the small town of Pescadero for yet another control and a great sandwich from the Arc Angeli Market, they had plenty of treats and more for the hungry randonneur. We took our time here too, a little longer than what we should have but hey that sandwich was so good! I was again happy with a full stomach and new calories that would be needed soon. We were headed to yet another great section of fire road, the Gazos Creek Rd. Gazos Creek was steeper at sections than Purisima Creek trail but overall a little bit shorter. At top of the hill there were a couple of railcars! How did those got there? 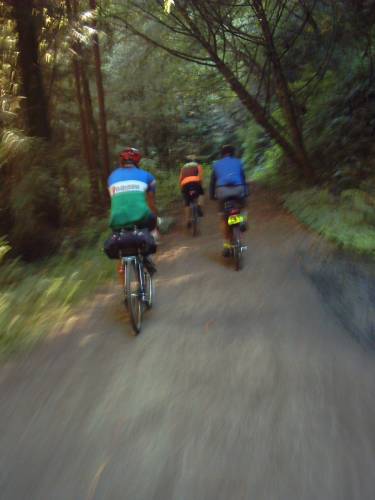 After a few more miles of ups and downs we got to Big Basin State Park another control and a critical stop for our team. I was new to most of this route and had no idea of the terrain ahead but there was some crazy talk about us not being able to complete the DART in time. After a bunch of precious time discussing our options I came up with what I think was the logical option. Lets stick to the planned route and put all of our effort into finishing on time. "We are randonneurs, we can make it!" somehow my team members bought it :)

We climbed for a while and then we descended into civilization and into Los Gatos for a quick control. By now we were spread out one rider every minute or so. Brian was at the gas station we used as control, I arrived next and then Heath and Sean; Nick was now running on fumes and arrived a little later. I was concerned we were not gonna make it to the final control on time so I urged team member to get going.

After getting our night riding gear ready we moved towards the final control on flat streets with ample bike lanes. I was trying to keep a good pace in front, not too fast but not slow either. I wanted to make sure we would make it in time for that final control. After a few flat miles we had to stop for a left turn and noticed we were missing Nick. We stopped for a while and discussed the options; Brian could wait for him and ride with him to Mountain View, we could all wait or we could move on and have Nick ride alone to the final control less than 6 miles away using his cue sheet. We opted for the last option with Brian in the front as this was his backyard territory. We moved swiftly and got to the Tied House Brewery in Mountain View just in time to share a beer and food with all other teams already there. I believe we were the last team to arrive. We also were one of two teams with the longest route and ours also had the most climbing, we were toasted but happy!. 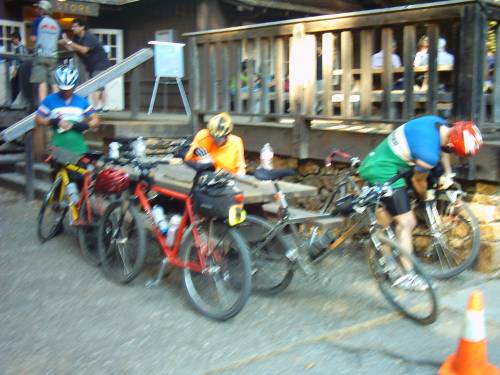 After what seemed like a long time but in fact where only 10-15 minutes Nick arrived and we all ordered food and socialized.

I took the train back to San Francisco along with Heath and Brian that despite living a few miles from the final control had to return to the city to pick up his car and drive back! John P and his team were also on the train. Since John and I live very close we got off the train and transferred to BART to get a little closer to home then rode the few blocks on Polk street were we got the tail of kids coming out of a party, hundreds of them all looking the same in costumes. We fit in perfectly with our helmets and reflective stuff :) a good night of sleep awaited.