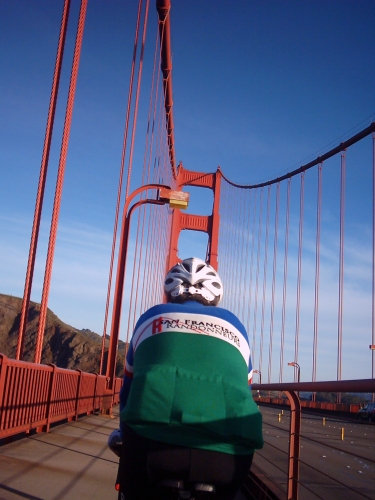 Unlike the workers ride a few weeks back, this time the forecast was for great weather, not much wind, sunny and temperatures in the mid 60's, just perfect. It was going to be four of us, Russ F, Todd T,John P and myself. We agreed on a start time of 8amm a little later than normal. I was the first rider to arrive at the start, where Rob was already parking, he had made the trip to SF to hand out the brevet cards and send us on our way.

Soon afterward Russ and John arrived. A few minutes later Todd with the wool jerseys John and I had ordered last year. I put on my spanking new short sleeve jersey and then we all went to Russ' car to drop the remaining jerseys in his trunk.

I've spent many miles talking and riding with John and Todd, who I give credit for getting me into Randonneuring when he was the San Francisco Randonneurs (SFR) Regional Brevet Administrator (RBA). He endured my endless questions at the final control of my first brevets and provided much encouragement, thanks Todd. This would be my first time riding with Russ, but from John reference I knew he was a nice guy and much faster rider than me. We had a good group.

Short sleeves and my trusted knickers for an early February brevet! Ah, the global warming age. The pace was easy all the way to Fairfax, at that point Russ, the stronger rider by far, went ahead. The rest of us arrived to the top of White's hill very close behind. On the descent and the next valley, Russ and Todd went ahead and John and I saved a little energy by keeping a more conservative pace.

We regrouped at the Cheese Factory and took advantage of the restroom and also had a chat with another group of riders who arrived there just after us. Right in Petaluma but before stopping I pulled out the brevet card to confirm that we had a choice between getting our Control proof of passage (cash register receipt) at 7-Eleven or Peet's on the main drag. We chose 7-Eleven for an average 5-10 minute stop. Time to take the knee warmers off, it was a beautiful morning.

The next stretch of road between Petaluma and Valley Ford is as boring as they come. A long and straight road where you can see for miles at a time. Fortunately we did not have a headwind today. I went in front and after 2-3 miles I looked back and saw only Todd. John and Russ where way back. Taking turns pulling, Todd and I made it to Valley Ford and got our food/drinks and corresponding control receipt. It took a while for John and Russ to arrive, Russ had gotten a flat. This was a long control stop,at least 30-40 minutes. 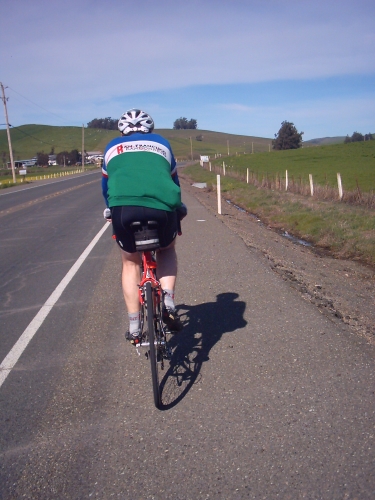 The route now follows Hwy 1 and the rollers provide a more interesting scenery and less traffic, nicer cycling. Just ahead of Tomales John found some new energy and went chasing after Russ, I could barely see them from time to time when their heads popped out at the top of a hill ahead of me. Todd followed a little behind me.

I was getting tired and was not feeling so good. By Marshall I was glad Russ and John had slowed down to wait for us. As soon as Todd rejoined Russ took the lead and Todd had the energy to follow, I was cooked. John saw me suffering and kindly pulled me all the way to Pt Reyes where Russ and Todd had arrived a couple of minutes before. They where getting ready to go into the Bovine Bakery but since John wanted to spend his usual time on the couch visiting with Mike at Black Mountain Cycles, we all went over there instead. John and I purchased some energy bars at Mike's Black Mountain Cycle and got my receipt. I think Russ and Todd got their receipt when they went back to the Bovine Bakery. This was another long contro lstop, we spent perhaps an hour at Py Reyes Station, other Randonneurs should not follow our example :) We were now riding at a slower, more comfortable pace, at least for me.

John had slowed down a little but still not too far behind so when we did a restroom stop at the Nicasio portable toilets, we quickly regrouped. The next hill managed to split us yet one more time. I was able to keep Russ in view most of the way to the other side of the hill, Todd and John not too far behind. We were less than 5 miles form the urban area, I think at this point the irregular pace we've had done all day was getting its toll in all of us; a weird thing since we all have been Randonneuring for a while but today had not managed to find that mythical "sweet pace" (tm) the point where speed is not too fast nor too slow for any rider.

We completed those ~20 miles from the top of White's Hill just outside Fairfax to Sausalito at an easy pace as we had done earlier in the day, I was now feeling better. Russ and I again climbed out of Sausalito to the little bump that leads to the Northwest Golden Gate Bridge parking lot and waited just a little for Todd and then John who had stopped to buy something in Sausalito. This time we were required to get a receipt at the Sports Basement store adjacent to the finish, 15:42 was the time on my receipt; 9:42 to complete this ride this time. Longer than we all expected but still we had a good time. We chatted for a while and then called it a day.

Now to invoke the rain Gods to keep weather dry for the upcoming 300k workers ride. This workers ride business is definitely fun.