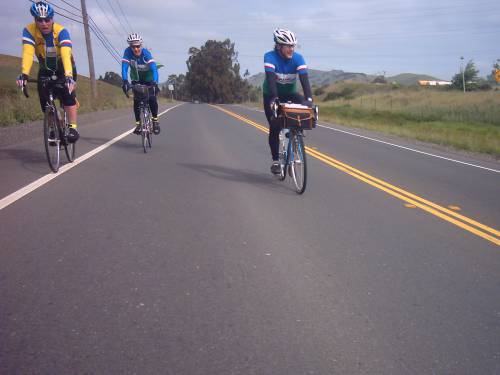 I've been riding tired most of the brevets this year. I am sure its the extra exercise, running a marathon per month, I've added to the mix. The week before the Fleche we went on a short but somewhat hillier mixed terrain ride with fellow SF Randonneurs, Adrian B, John P, Robbins P. (on my fleche team) Greg B. Nick L. and Nathan. After the ride I felt a little tired even though I did not push it during the hills.

Took it easy all week and ate more carbohydrates which seem to have been lacking from my diet recently. Mid week Robbins sent a message to the team letting us know he would not be able to make the ride, Achilles tendon issues, argh... hope he feels better soon. A couple of days later seeing the weather forecast had 20-30% chance of rain on Saturday-Sunday I sent an email to my team asking if they were going to ride with fenders. Rob H and Bill M both say yes, Bruce B said he would not. I went with my - if < 30% chance rain no need for fenders - informal rule and went to bed at 10:45. By 1am I was still thinking if I should be installing them darned fenders on the bike.

6:45am at Bruce's dining table we were sharing an excellent pastry, coffee and at 7:07 am we were moving. This is the third time I've done this route with Bruce, he has a perfectly timed cue sheet where the time estimates for the distances is never off by more than a few minutes. This time we would add a detour of ~10 miles to ride to Winters for lunch. The ride went smoothly until we arrived to the control in Winters at a restaurant I would try to avoid from now on, too slow to serve. While waiting to be served I remembered a GPS application (MotionX GPSLite) I had on my crappy iphone that allows you to send your coordinates to any email address, I thought the wife would like to receive that so I sent her the coordinates of the current location. 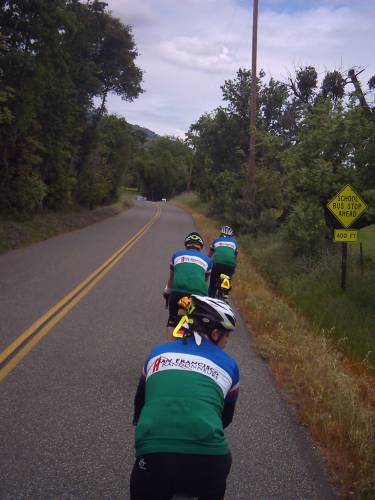 I continued doing this in every sit-down stop during the ride. From Winters we had a longish stretch to the next control in Calistoga. Cardiac hill has never been to hard for me but after that is the infamous Silverado trail section. I hate this long boring road, I had a very hard time here and was not happy. The sky was turning darker with every ankle revolution.

In Calistoga we did a short stop at a gas station to get some water. Tom's H team showed up while we were there. Just after descending the hill after Calistoga the mist was getting thicker and thicker, at the sign of a few trees on the side of the road Bruce and I decided it was a good place to stop to put our rain jackets. We all ended up getting all of our rain gear on. I was glad I had brought my getho rain pants that have proven so very handy in many occasions, however, I had forgotten to pack the thicker gloves. It was ok, I had a pair of glove liners in the backpack and also vinyl gloves in case it came to very cold temperatures overnight. Now 6:30ish, there was was a persistent light rain that followed us to the Dinner control in Healdsburg's Bear Republic. Tom H's team arrived while we were having dinner.

I changed into dry tops and shorts and was ready to pedal into the rainy night. Temperature was pleasant and rain was never heavy at this point but a constant flow of drops accumulated on my clear sport lenses. Just 25 miles to Santa Rosa for our first Dennys. They were out of apple pie so we all ordered some sort of apple thing with caramel, too sweet. Nobody wanted to order the bacon sundae, I wondered why.

Another 15 miles and now we're in the Dennys in Petaluma, hash browns this time. Before we were comfortable it was time to leave. We had been running about 15 minutes behind in a few places, no cause for alarm. The rain was picking up a little. Climbing out of Petaluma was not hard, Rob and I climbed togather and just a little behind Bruce and Bill. Descending into Nicasio Reservoir I felt wet for the first time. My socks were getting wet. 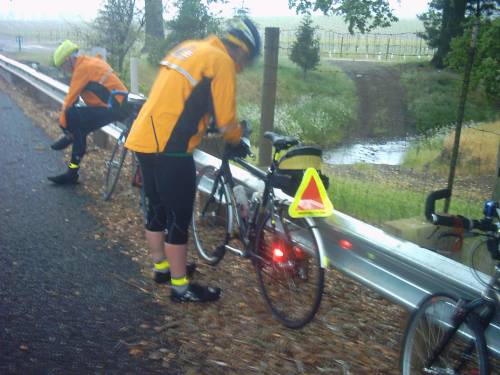 Rain, rain, go away! but that did not work. We made our way on wet streets to the luxurious booth in the Dennys in Corte Madera. I went straight into the restroom to take my socks off and squeeze them of all that excess water. That helped me feel a little better. By now I was used to the looks of patrons of all places where we had stopped during the night. They did not understand why one would be riding at night and in this rainy weather. A disease we have makes us put ourselves in these situations and we enjoy it, go figure.

We were about 15 minutes late but had about 1:45 minutes to cover the very familiar miles to the final control in San Francisco. Made in a rainy morning to Crepes on Cole. We were the first team to arrive at 6:50 am. Charlie J.'s smiling face was there to welcome and greet us, Thanks Charlie.

Sent one last set of coordinates to the wife. While we were there eating she arrived with our new dog (Pedro, Paco or my preferred name Gato -as in Cat-). He would have to wait in the car. She had packed dry clothes for me and on top of the clothes there was a chocolate easter bunny, cute. I did not have the stomach for chocolate at the time but Jason P. got the ears and it went down from there, poor bunny it died a slow death. I finished my double espresso, strawberry crepe with icecream and then looked forward to talking to other teams. 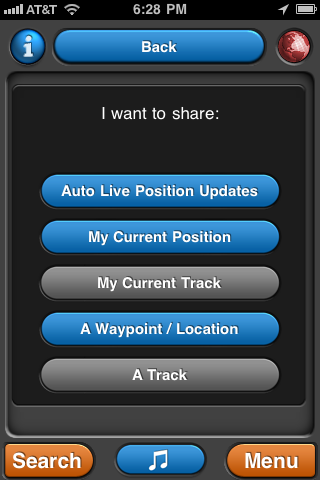 It was time to leave. We gave a ride to keith B to his car parked at Charlie J house and went home to nap for a couple hours. Ah, the Fleche one of my favorite events. A must do event (at least once) for any self respecting randonneur, highly recommend it.

Maybe during this upcoming 600k workers ride John and I are doing this next weekend I will send the GPS coordinates to others (sister in Switzerland, friends in Colombia and of course riding partners here in the Bay Area) and see what they think, cool? not so much? indifferent.