What the heck! four extra pounds this week alone? Wine consumption had been the same but I definitely had a few extra treats earlier in the week and spending one night at Pt Reyes did not help, you know, pizza for dinner and Bovine bakery pastries for breakfast. Not much riding the week before except a very nice, but hard ride celebrating Gabe's birthday. He took us on a pain-fest ride in the mountains South of San Francisco, we left around 9 am and arrived home about 12 hrs later tired and hungry. 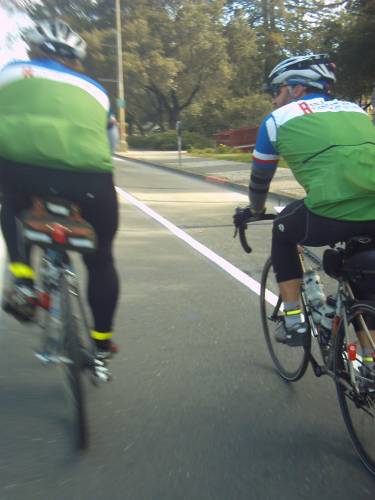 But that was last week, now it was time for the SFR 300k, a route I don't like but do every year. At 6am ~100 riders and I were leaving the Golden Gate Bridge headed towards Marin and Sonoma counties. Did I mentioned I do not like this route? I don't know why I keep coming back every year. It has 2 very long and extra boring sections of flat and straight riding that always attempt to kill my intention to have a nice ride.

I rode to Fairfax with the second group, the leading guys were probably 10 minutes ahead of us. Knowing I was hauling extra pounds of uncooperative body weight I was going to ride slow. I got to the top of White's Hill right behind Greg B and another rider that definitely had the legs to breeze through the valley on the other side. I tucked behing Greg but then they proved too strong for me and I just let them go, only to be slowed down even more by a flat rear tire, oh well.

After seeing many familiar faces go by I was back on my bike 00:07:24 later. One rider came from behind and I jumped on his tail. He pull me till we caught up with riders ahead, Gabe E. and Brian C. They took the Samuel P. Taylor bike path and I stayed on the road. Tom H joined me for a while and we had a pleasant couple of miles chatting, but he was riding stronger than me and he went on alone after awhile.

The outside of the Petaluma Safeway was decorated with all sorts of bikes, I added mine to the collection and went straight to the restroom, got to pee real bad, I guess a good sign I was drinking enough? Got a couple bottles of Gatorade to fill out my backpack bladder. 00:13:03 spent at this stop. 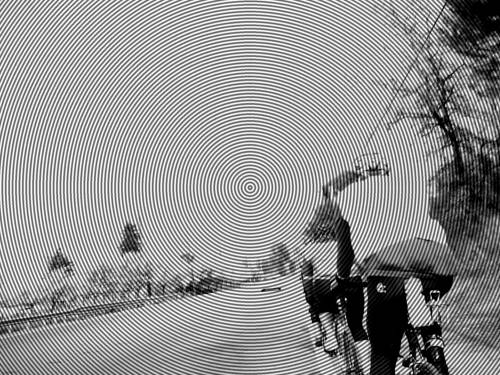 At the next traffic light two SFR jerseys were waiting for a light change. One of them turned around and asked me if I was Carlos," yep, that's me", "ah I am Dean A. and this is Tim V". "Nice to put names with faces" we both said. Tim was setting a very nice relaxed pace and I was happy to be riding with someone during this boring section to Healdsburg. On our way we picked up more riders. About 5 miles from Healdsburg there was a rider fixing a flat, it was Greg. I knew he had stuff to fix it, but asked if it was a flat anyways.

At Healdsburg, straight to pee again. After that I got more Gatorade and my usual soup and sat at one of the tables outside. Many familiar faces, Masa K., Alex P, Gabe, Brian, Esteban D., Rob H... One by one most got ready to leave but I decided to wait for Greg to come, in the meantime one more pee trip. After 45 minutes Greg came, after 4 flats he had to stop at a bike shop to buy a new rear tire and more tubes! He went in bought his food and drinks while I went once more... yes to the restroom.

00:55:55 after I had arrived in Healdsburg we were on our way, sort of. After a while I had to stop once more to pee, 00:03:00 more. There was supposed to be a wine tasting event and traffic on Westside Dr. was just a little busier than normal but not too bad. River Rd. was as boring as usual, we joined other riders and by the time we arrived at the coast at Hwy1 we were about 6-7 riders.

I climbed the first hill ahead and asked Greg if he would mind doing yet another stop, "sure no problem" the rest of the group kept on moving. 00:02:46 more. Near Bodega Bay we caught up with Bill L., and then Esteban. It was both their first time doing this route and they were looking forward to the next control. "Just a mile to go!" I said. 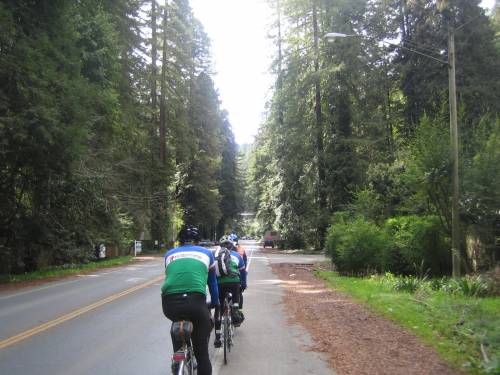 Pepperoni pizza, a V8 and a Five Hour Energy drink, oh yes good diet. 00:12:27 at this Control. We had a slight tail wind that helped us negotiate the long rollers to Valley Ford.

Greg: Do you think Monica is still at the Inn in Pt Reyes? Maybe I should just stop at there and have her give me a ride to San Francisco, I can leave my bike there.
Me: I don't know, probably left already, but if she is there I'm sure she would not mind.

Gabe and another rider where at the Marshall store, it was about 4:30pm. I had a bowl of clam chowder and got water. after 00:20:44 we were out of there. Gabe left a few minutes before us.

As we neared Pt Reyes:
Me: You said you were getting cold, maybe we should stop at the inn for coffee and a sit on the couch?
Greg: If I stop there I'll probably end up staying.
Me: Monica may be there to give us a ride back to San Francisco, ha, ha.

Cool heads prevailed and we moved on.

Bill L. (Bubba) and two other riders caught up to us soon after we left Hwy 1. They were going at a pace slightly faster that what I was comfortable with. Greg asked if I wanted to stay with them. "Nah, I'm tired". We could see them a 100 yards ahead of us for a long time. They caught up to a lone tail light, Gabe, and the four rode still within a few hundred yards ahead. 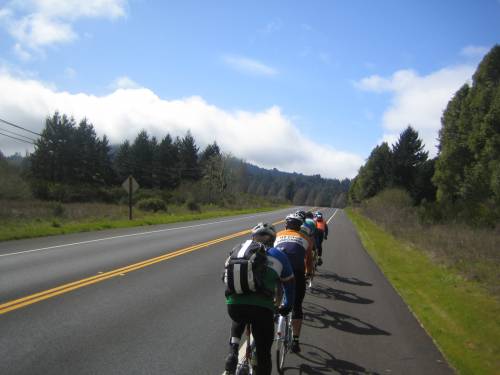 On the hill outside Nicasio Gabe was on the side of the road taking a break. We nodded and slowly climbed. On the bottom of the hill at Sir Francis Drake we slowed a little so Gabe would join us. Civilization was just a hill away. In Fairfax Greg asked if I would mind stopping while he made a call. "No, I can use the time to use the restroom" Gabe stopped with us and after 00:07:26 we moved on to the final control in San Francisco.

In Sausalito Bruce M. joined us and the four of us climbed towards the bridge. I went a little ahead and timed my request to open the gate at the Golden Gate Bridge sidewalk so they would not have to stop. A few more turns and we all arrived together at 8:11pm. 14:11:00 for this route not bad considering how much I peed...