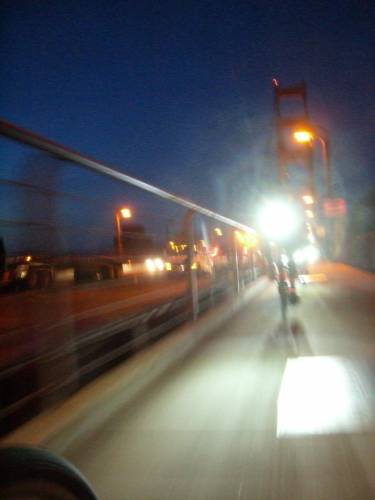 Show up a little before the start, claim my Brevet card, do my little ride and come home to a hot shower. Simple.

So I did. I was able to get to the start with a few minutes to spare and enough time to chat with John P before we headed out. We were ahead of the pack crossing the Golden Gate Bridge which is nice, after that I rode with the lead and second group until we got to White's Hill where I did not want to chase anyone so early. I had a chance to chat a little with other riders, talking about La Ruta Loca Randonnee with Jeremiah J who did it a few years ago and wants to do it again but has not been able due to schedule conflicts also talked with Eric W who was doing his first 400k and longest ride so far, Metin U team partner on the recent 2013 NorCal Fleche, Mike B who I rode with for more than half the SFR 2012 400k and many other riders. All happy to be riding on such nice day.

A little Northwest brezze was getting stronger.

By the time we turn from Nicasio Valley into Point Reyes Petaluma Rd the group was probably 15 riders strong. Mike and I rode to the Cheese Factory where he stopped for a short break. I kept going alone and and the long miles from there to the Valley Ford only one or two riders passed me. I could not see anybody ahead on the distance or behind me, something unusual so early on this ride. It was now officially windy when a group of riders passed me on the big rollers of Hwy 1, I jump into that train. We got to the Bodega control where I went in got a soda, some water and was out of there in no time ready for Joy Rd. 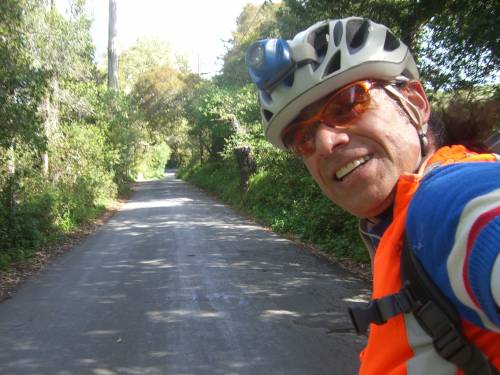 Ah the beauty of climbing on a quiet road. I actually like Joy Rd under this weather conditions and also knowing once I get to the top is mostly down to the next control in Guernville. Near the top I noticed Eric was behind me, I was riding at my pace and when he flew by on the descend I did not feel the urge to chase him, he was always on view a 100 or so yards ahead anyways. I kept on Bohemian Hwy to Hwy 116 and then maintained my steady pace to the Next Control. Eric A was now few yards behind.

Only two soup flavors left at Safeway. I went for the Clam Chowder. I was done but then I remember my right shoe was not geting fully engaged by the pedal so a little investigation was needed. Oh crap a loooong screw was undone on the pedal, no wonder. Got the tools out and while I fixed it a few potential riding paceline groups left. I left alone. The wind on this section was not a factor so no big deal plus I was having a good day so far. The same group that had passed me before Bodega passed me again on Westside Rd. I jumped again on the back and that was my mistake for the day. They were riding a little faster than what I felt was a comfortable pace for me. Eventually one rider dropped and a couple of miles later, I did. The damage was done.

More head wind more lonely miles. The rider who had dropped from the group passed me again and I rode at his more comfortable pace till we hit the hills of Dutcher Creek Rd. He moved on I slowed down. Cloverdale was just a few miles away. When I got there just a few riders were at the regular spot were most of us go for water/food before the next hill. One by one all left. I was having some sort of spicy Doritos, a coconut popsicle and a pomegranate juice, all at the same time, yummy! 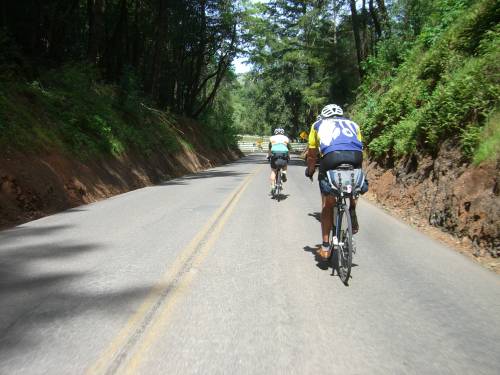 Left Cloverdale alone. It was a beautiful day. On a little hill before the Hwy 128 turn I almost ran over a large snake that was basking on the warm road shoulder. Nice gold color but I was glad we did not get to know each other better.

At the bottom of the long climb Eric announced himself, he climbed a little behind me to Mountain House Rd. where we had the opportunity to chat a little more. IMO this section of the ride is the most scenic segment of all SFR brevets. In no time we were near the Hopland Valero Control. Got in got a beer a slice of pizza and sat at a table next to the electrical outlet to charge my GPS. Eric joined me with his own pizza and beer. When we were ready to leave other riders have arrived.

Now what had been a crazy strong head wind was now a crazy strong tail wind, yeah! We cruised effortlessly down South on hwy 101. Heath A. joined us on Geysers Rd and the three of us stopped for a last change food/water in Geyserville at the store at the turn towards Hwy 128. More strong tail winds help us move all the way to Chalk Hill Rd. At top of the hill I was planing to stop to put my nighttime clothes when I heard "Yeah, that's a good idea" it was Mike B on the oposite side of the road who had the same idea. 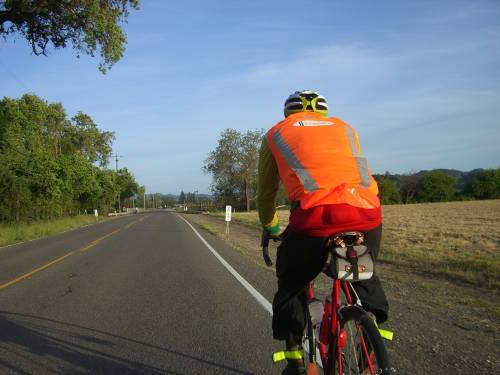 There was still daylight but the long sleeve jersey and relective vest went on; we descended towards the valley on the other side. Now the four of us were riding the flat boring miles to Petaluma. Night came a while after the had been riding on the valley the pace was a little fast when Eric was in front but fortunately Mike was on the rotation after him and slowed things to a steady pace, more in the 400k paceline range :) A few miles before the Control we picked up another rider. David, who had driven from Stockton to participate in this brevet!

Got to the Control at the Safeway in Petaluma a little after 9pm. Chilly soup was still available! I went for that and some leftover gatorade the previous group of riders had left on the table we inherited. The Petaluma Safeway was the happening place for the local high school kids. After a little under an hour we left. I was tired and crawled up D Street. The group started to get smaller on the distance but then they slowed down and I was able to rejoin them. Soon after, Heath got a flat. I saw an opportunity to save us all some time and told them I would climb ahead and wait at the top of the hill, David joined me.

Timing was almost perfect. A few minutes after getting to the top, Mike, Heath and Eric showed up, without stopping we rolled towards Nicasio. The pace slowed a little and I was glad. Soon we were in Fairfax then all other little towns to Sausalito. One last hill, Eric was now having knee issues. We climbed to the bridge and waited just a little for him to join us and we all cross the Bridge together and finished at 1:40am, 19:40 hrs on the road. 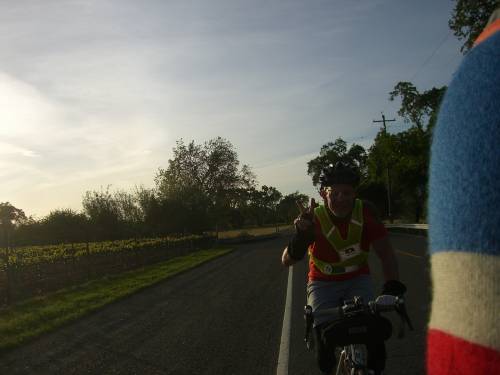 Volunteers greeted us and then Mike told us it was David's birthday. We sang a tired randonneur out of tune so so happy birthday, drank and ate and when I started to get cold I pedaled the last 5 miles to a hot shower, a cold pizza and an beer.

Thanks to all my riding partners but especially to Eric who did great on his first 400k, Mike and Heath.