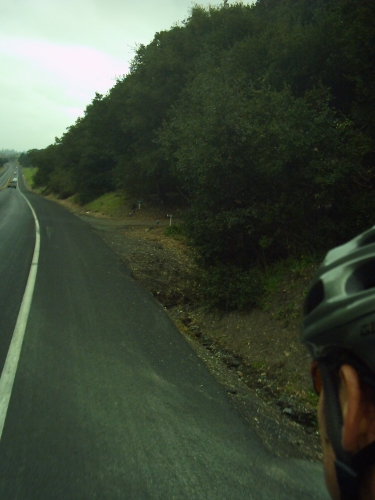 It's always about timing. Last month, the day before the SFR Two Rock/Valley Ford 200k I had a bad sore throat; good thing I had done the course the week before as part of the worker's ride and had gotten those miles in. I volunteered at the start and final controls and had a great time chatting with riders as they arrived. The sore throat has remained, complemented by lots of coughing and in addition I have pulled a muscle on my right leg while doing some trail running, nothing serious but it had me limping a little for a few days. So, I had been watching both throat and leg making sure that they both healed in time to allow me to ride comfortably the upcoming 300k.

This is my least favorite brevet distance, neither short nor quite long enough so its a hard event to pace myself, just a case where for me middle ground is no good. Well, time to confront my demons head on and challenge myself a little. This time I would try to do the 300k riding alone. To make sure that I would not have much of a chance to hide my weaknesses behind a paceline, I decided to volunteer at the final control for this event and do the volunteer's ride the weekend before.

Since not too many riders do the volunteer's ride for this distance there is a good chance I will be alone for most of the way. I was looking forward to this ride, it would be like touring alone but without the load. Just hoped for good weather. I had the bike and necessary supplies ready by Friday evening, but not before paying a visit to a local Safeway to familiarize myself with the layout of the store and the location of the stuff I like, V8 single serving cans/bottles and Odwalla energy bars.

I rarely go to Safeway, except during San Francisco randonneurs brevets as we use their stores for controls. On my hunt for individual bottles or cans of V8 I found that Safeway either stopped selling singles or the employees I asked about V8 singles are as clueless as I am. In any case, they place the Odwala bars not with all other energy bars but in small displays next to the Odwalla juices. One thing the caught my eye while in the energy bar aisle were the "healthy" shakes, Ensure, Glucerna and the winner of the worst name for a product (outside Japan where Pocari Sweat wins hands down) Muscle Milk. All these things have a high Potassium content and about 250 calories and taste like flavored milk, sort of. Chocolate milk and my stomach are not good friends so this could be worth a try. I purchased a couple and drank a few sips of one, my stomach did not complain and the taste was not too bad. 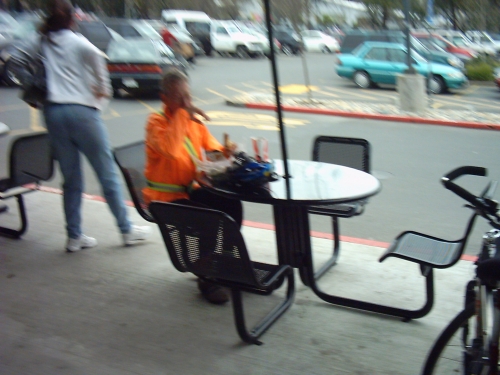 Saturday (February 20th) morning six other riders and myself met up with Rob H. our RBA. We received our brevet cards and then left the Golden Gate Bridge at 6:00am. After the first hill it was Tim H. riding a nice looking fixed and myself, we continued together to White's Hill were Tim stayed a little behind descending while I easily coasted my way down. A few miles more and our "secret" control was where we always have it for this ride :) Greg B. was manning the control, he had ridden his city bike with some water on the rack for us riders, thanks Greg. I was the first rider there and told him Tim should be less then five minutes away.

This morning the hills to Petaluma were not as vicious as on other occasions. Got to the first control at Safeway, locked my bike with a tiny cable/padlock I had brought since I figured we would not have the advantage of a large group of riders outside Safeways looking after each others bikes, and walked straight to the aisle where Ensure and the likes should be, perfect no wasted time. A restroom stop and out I went. Tim was coming in. I waited for him to come out and then the rest of the group came in Charlie J., Robert P., Thomas H., Franklyn W., and Dwight B.

The next section to Healdsburg is part of the reason I don't like the 300k. It has enough turns to get lost and long boring straight flat sections. I made it in reasonable time and without getting lost. Once more into Safeway, this time for some potato-something soup, a couple of Ensure bottles and some Gatorade. Again, Tim was coming in while I was coming out. I sat outside and drank the hot soup, when Tim came out with his sandwich I was getting ready to go. Shot an out of focus photo of him and on I went.

The winding road that connects to Hwy 116 offers nice riding, winter or summer and is one of them scenic roads that reminds me of why I ride brevets in Northern California, just beautiful. On the other hand the segment after this one is the complete opposite. Hwy 116 is boring and it goes on for a while. The sign of Hwy 1 always brings smiles to me. I love Hwy 1 from here going South. A quick stop at the intersection for discretely applying some Bag Balm and a drink and I was good to go. 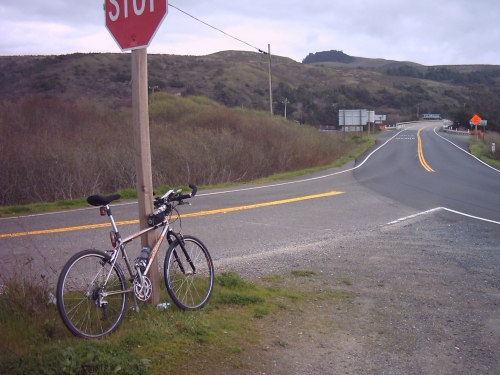 A tail wind made the 10 or so miles to Bodega Bay a snap. Got one more of those drinks, Muscle Milk this time and a V8. So far the drinks were working very well when combined with Gatorade and the other energy bars I had discovered a few weeks before. "Pro Bar" energy bars have 400 calories each! These things are twice the price of regular energy bars but carry twice the punch in slightly smaller size, are vegan (I'm not but note it here just if you care) and they do taste good and are easy to chew, good stuff me thinks. Sports Basement has them in San Francisco and REI lists them on their website so maybe their stores also carry them. I cut three Pro Bars, each in four small squares and carried them in my top tube bag; about 1200 calories in there with room to spare for an energy gel and some sweet treats just in case. Hey, this boy has a sweet tooth that needs to be taken care of.

Tim came again while I was getting out. Unbelievable he was doing so well on that fixed bike, it never stops amazing me riders on fixed/single speed bikes. Tim, see you at Marshall for Clam Chowder! and I left. When I arrived to the Marshall store the front door was shut but the side door was open so I went in that way and the nice woman took care of my brevet needs by stamping my card. Finished off a small serving of the clam chowder that is not one of my favorite foods but needed to have and headed out. Tim was just arriving. I urged him to go in before they closed and he was able to get his share of the soup and other supplies.

The last leg of the ride was just ahead. I left at around 5pm and was happy with the views, my ride and everything in between. Right before the turn from Hwy 1 to Platform Rd somebody called my name, It was Mike, master mechanic, employee and owner of Black Mountain Cycles in Point Reyes. We chatted for a little bit and then I moved on towards Nicasio. It is nice and weird to run into friends in the middle of a ride, I left with a smile.

I was hoping that the Nicasio store would be open but when I got there a little past 6pm it was closed. Well, may as well use the port-a-potty in front across the street and move on. About two hours to the bridge. I had enough water and food to get there without stopping. Felt good climbing the remaining hills and cruised the Golden Gate bridge at a very decent clip to finish my ride at 7:45pm. 13:45hrs for this 300k, my best time ever for this route. 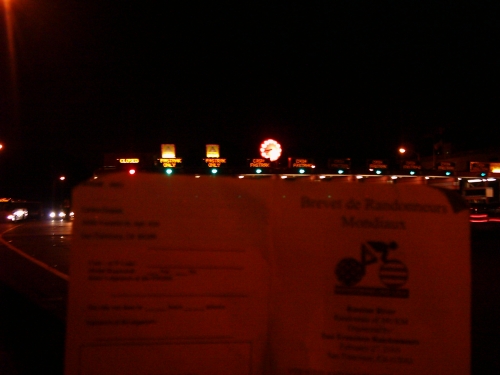 So, why riding alone got me faster to the final control and what I learned?