I had decided to volunteer for the start control and the final control for the Valley Ford 200k so that meant if I wanted to do the event it would be easier if I rode the workers (volunteers) ride rather than start a while after everyone else on event day. As a bonus we were starting a little later, half an hour later. Woohoo! 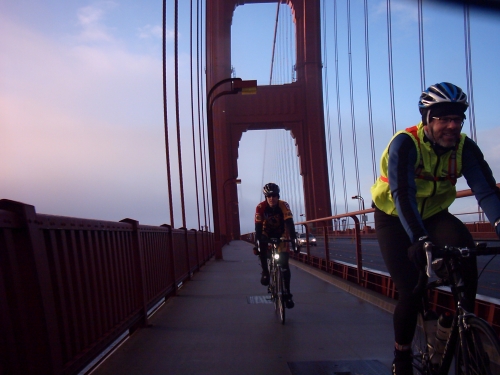 As is always the case before a brevet, I checked the weather the day before and the miss-cast was for 30% chance of rain but probably sunny otherwise. The previous weekend I had decided against fenders and got wet because of that decision, this time I installed the very shwanky wooden fenders Willy N. gave me last year, (thanks again Willy!) I didn't install one of the rear bridge brackets but just tied it with some wire. They were firmly attached to the bike but rattled a little on rough road sections. All the work of installing fenders undoubtedly meant that there would be no rain, that is the rule in San Francisco. We would see about that.

Seven of us started from the front of the Marina Safeway at 7:30am. Rob H and Kevin F were doing the route as a Permanent. Greg B, Greg M, Willy N,  Robbins P. and I were doing the route as the "Workers' ride". The Workers' ride officially started from Mason and Halleck so Rob started counting our time when we reached that point, a little over a mile form the Marina Safeway.

So we are riding a little ahead of the group with both Gregs when Greg B. and I had the game plan conversation:
Greg B: so Carlos, what is your plan for today? ride fast or take it easy
Me: easy is good with me
Greg B: OK we'll do the hills hard and the flats easy 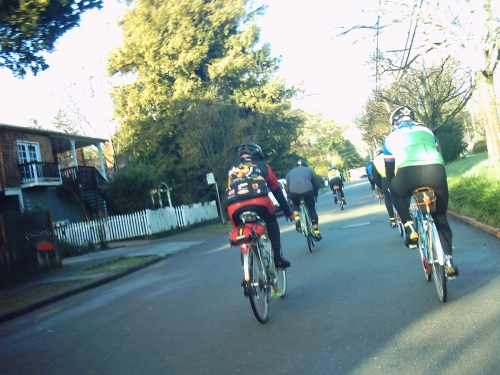 That was it, plan for an easy ride. We moved efficiently to the bottom of Camino Alto hill and then climbed at an easy pace, we were going to wait on the other side for Robbins. Near the top he caught up with us and we all rode to Ross where the rest of the group joined us. White's Hill broke the group again. Both Gregs climbed ahead and I took it easy. In the valley at the other side we regrouped and rode the hills to Nicasio  and then Point Reyes Petaluma Rd as a compact trio. If was a little foggy and our glasses were useless, a stop was needed at the next turn to clean them and regroup with the others.

So far we were doing hiils at a decent pace, not too fast. Before I knew it we were in Petaluma getting a receipt at the Seven-11. A few minutes later the rest of the group arrived. We all left together, or so I thought, but a few miles later Willy was not with us. Greg B was now setting a brisk pace and again we all spread on the road. It was again both Greg B, Greg M. and me. The stretch of road from Petaluma to Valley Ford is probably the most monotonous of the route. Mostly flat with nice farms here and there but freaking straight lines that leave not much to the imagination, curves and turns I like them.

Valley Ford our second control. A great general store with good selection of crappy and not so crappy food and a couple of decent port-a-potty in the back, complete with a free standing sink and the whole thing is always clean. The other riders all came and we ate our very different food choices. I had brought dried anchovies, that are crunchy and salty, got a banana, some tomato juice and some peanut butter crackers , yummy! ;) We had a longish break here and when it was time to move the pedals and I had a hard discussion and they were real mean to me for a while. 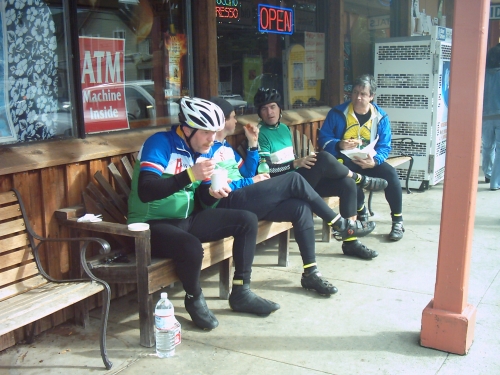 Climbing the rollers and hills before Tomales was hard. Once we passed Tomales I had an energy gel and that helped. We were closing in on Marshall and I was convinced there was another control there. I was in the front and happily  was putting down my feet on firm ground when both Gregs went, "are you stopping?" and I went "the Control!" and they went "this is not a Control!" and I went "uh, sorry..." With shattered dreams of a stop, I followed them towards Point Reyes Station the real third Control.

A few years back Greg B had taken Jim G and I to Point Reyes Station from Hwy 1 via a little more scenic route than the last 3 miles before town, we followed that route again today, it is definitely scenic and very quiet. We stopped at the public restroom in town before finding a place to get our receipt to prove we were at the Control. Of course the Bovine Bakery was the chosen location. I got a slice of pepperoni/mushroom pizza and a small coffee. Willy came then Robbins then Rob and Kevin. We hung out there for a while. This felt more like a regular weekend ride than a brevet, it was a nice change.

The hill out of Nicasio was a little hard but again I was taking my time, both Gregs and the new rider climbed ahead, Robbins behind. We regrouped on the other side at the intersection with Sir Francis Drake and rode as a happy family to The Java Hut.

Another regroup here. Rob and Kevin who had taken the little longer way from the Bovine Bakery to here arrived and we sat there for a little longer. When it was time to go Kevin and Rob stayed behind but then Rob caught up with us. We were just cruising to San Francisco. 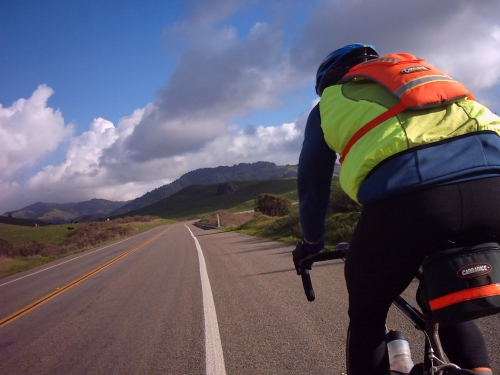 Somewhere along the way to Camino Alto we lost Greg M and Rob. Then the hill broke the group even more. Greg B climbed ahead and I never saw him until Sausalito, Robbins and Willy we did not see till the end.

Climbed with Greg out of Sausalito and rode to the finish at Mason and Halleck. it was 5:23. Soon after Robbins came in and then Willy. The rest of the group came right after them. Handed the cards to Rob and rode home happy.

Dinner you ask? pasta at Victors Pizzeria on Polk St near California St.

This is a nice route on very familiar roads. It has a decent amount of climbing (~10k as per the GPX file) but as with most hills in the area, nothing longer than a mile or two. However be prepared to climb. On my score card this route is easier than the SFR Point Reyes Station 200k but harder than the SFR Russian River 200k routes. YMMV. ( Please note our trio took a detour a couple of miles before the town of Point Reyes Station. The distance is about the same as staying on the "official" route but more scenic. If you follow or detour as shown on the map generated from the GPX  file above you may get lost! so I recommend staying on Hwy 1  all the way to town)

The workers's ride was lots of fun. Learn more workers' rides and what you need to participate in one.