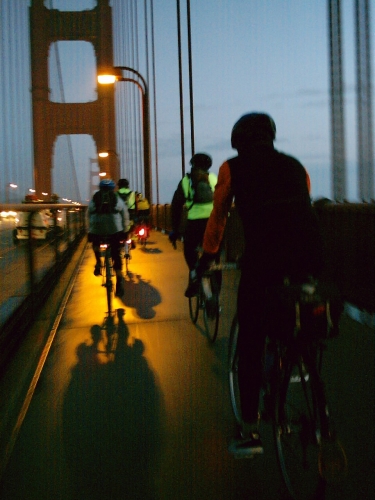 Okey dokey you can go to sleep now.

Not so fast boy, one thing is what common sense tells you and another what the mind wants to do. Ever since my last weekend excursion to Marshall I've been a little sick. Not the good kind of sick that sends you straight to bed with no room for discussion but the lingering "I-feel-good not-really" kind of sick. A life in black and white could be boring but I wish I was in one of them situations where binary is good.

For whatever reason I did not have a good night sleep, actually a very bad one. For me, a 200k brevet is not something to loose sleep over, not that I am a supper experienced randonneur but the 200k is a distance I feel confident/comfortable I can cover with not to much suffering. The head keep going to bicycle subjects, I even tried to throw at it some think-about-work, think-about-this-or-that, nothing worked. Anyhow, half sick, half rested I got up, took a shower (forgot the deodorant, sorry to my many ride mates if I was a little stinky) and out to the elevator I went. Once at the garage gate I realized I had left my trusted jacket on the floor by the closet. On my efforts to keep the noise to a minimum, so the lovely wife could sleep, I had forgotten to bring the jacket. Back up to the 4th floor, grab the jacket, and back down.

The ground was wet but there were no drops falling, little traffic, cool yet not uncomfortable weather. It was good day for a ride. A lot of blinkies going in front of the Golden Gate Bridge visitor center but it was getting a little late and I didn't have my Brevet Card yet, chatting with friends will have to wait. 7:00AM, Todd gave us his routine instructions and opened the cage full of monkeys. 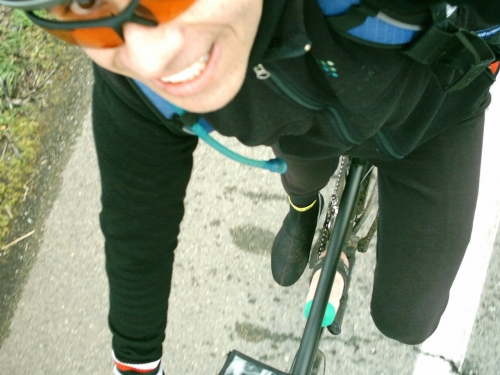 Traffic I tell you, traffic was heavy on the bridge but it moved smoothly. Camino Alto was the fist hill, JimG and Jim E (Cyclofiend) my usual ridding partners on/off road caught up with me and we rode from there to White Hill.

I still can't get over my amazement when I see Jim E climb on that fixed gear Quickbeam thing, something to make movies of, really. Back to my story, the new Neoprene gloves where not getting a passing grade, the top White Hill was the place for a new pair. At my request JimG and Jim E kept going. Miles passed before the entrance to the dirt section of the (Cross) Marin Bike Path. Once on the dirt I found my mojo, at least while I was riding off-road. I was flying that trail. Eventually I caught up with JimG and we rode to the end of that Samuel P Taylor where we started climbing the Olema Hill. JimG was going up to fast, I let him go and rode with another rider (Gabe I think?) to Perry's Deli, a place a couple on miles before Inverness. A quick stop for a Picante V8 and a short chat with Dan Brekkle and I was on my way. Still I was feeling tired and a little sick.

At the top of the Inverness hill Jim E was shredding some layers, did I mentioned it was an a-OK. day? Said hi and started the downhill. Dan and his partner in most brevets, Bruce Berg, flew by all I heard was Dan say Carlooooooos! From here I rode alone to the Point Reyes Lighthouse. Todd once again was there dispensing signatures to all interested. JimG had arrived a little before me, we chatted while having lunch, he was wired and in very good spirits. A pit stop for me and soon I was out the control. After I have ridden alone most of the way from the Lighthouse to Inverness, JimG caught up with me near the same deli I had visited earlier. We stopped to get something quick to drink and moved on to tackle Hwy1.

JimG was feeling good and he lead most of the way to Marshall, I was glad to have someone to draft but had been talking JimG into taking it easy, we still had about 60 miles more to go. 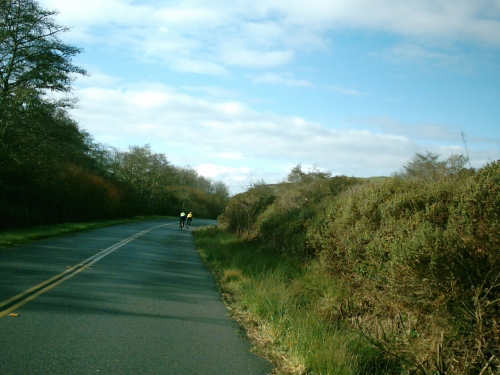 Oh yes we both were amazed at the pace Rob Hawks was riding, Rob is a pretty good rider and I have finished brevets with and very close to him but today he was just flying, we saw him near the intersection of Hwy 1 and Point Reyes Petaluma Rd, he was on the way back from Marshall, we on our way to Marshall, he had about 15-20 miles on us! What are they feeding you at home Rob? Pass the recipe.

Another short stop at the Marshall control, just some water for JimG and some coffee for me. Left Marshall and some miles after we crossed ways with Jim E. And later with Joe Gross, both were doing a fine. We took turns all the way to Nicassio where I suggested a pit stop. This is a good place to do a last toilet stop for this route. As soon as the Nicassio hill started JimG took off. I continued at my pace (I can go for maaaany miles at that pace) At Sir Francis Drake we joined forces again, JimG lead most of the way to White Hill. I'd been noticing he was checking his watch a lot so I tried to reassure him the final Control would be there when we got there. This time either my words worked or he was feeling the effects of his fast climbing, we slowed down to a more manageable pace.

Rode the familiar urban route to Larkspur. When I am at the bottom of Camino Alto I always get a second air. I lead the way to Sausalito and then up to the Golden Gate Bridge. Near the top JimG lost a little steam but he was still going strong. I flew across the bridge span, almost 30 mph and keep looking back to make sure JimG was not to far behind so we both could finish with the same "official" time. So happy! the end was near. Stopped the clock at 4:44PM there was still plenty daylight left. A good 200k brevet.

Chatted with Todd and other riders at the final control. 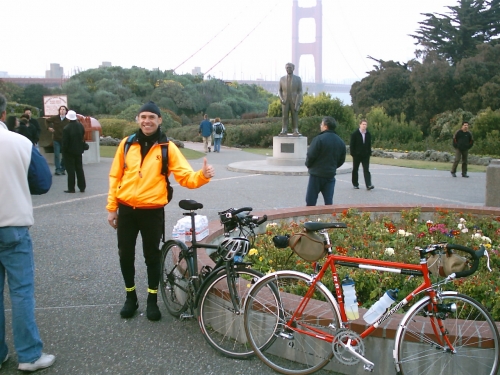 After being there for a while I started getting cold, I remember I had brought about 4oz of cognac in case I needed to get warm fast in the middle of nowhere, did get a little sip of that and it worked quite well, I think I'll bring it again on other brevets. JimG and I decided we wanted to wait for Jim E to arrive and hear his experience on this his first brevet and his first brevet on a fixed gear, I was impressed. He arrived, chatted and then we thank each other for a good day on the bike.

Rode home to a ton of Thai food leftovers from a party the lovely wife had attended while I was out riding.